As both an interior design editor and a haunted house podcast host, I’m drawn to home features that are equal parts charming and downright odd. And while researching the infamous and historic Lemp Mansion in St. Louis’s Benton Park neighborhood for an episode of our haunted house history podcast, Dark House, I came across tons of fascinating fun facts about common features in old, grand homes. And by “fascinating,” I mean sometimes nostalgic and beautiful, other times, downright creepy or problematic. Once cutting-edge and all-the-rage, these features now tend to be obsolete. But they still very much tell worthwhile stories about the evolution of technology.

Ahead, learn about some of the wildest domestic artifacts from fancy 19th- and 20th-century homes and how they went from valuable and functional essentials to mostly outdated and occasionally creepy.

Sometimes referred to as a servant bell system and sometimes as butler bell boards, these refer to a row of bells hanging on wall hooks, each labeled with the room it corresponded to so that the staff members knew which room they were being summoned to for assistance. The bells were attached to a pulley system within the walls. In other cases, the bells weren’t attached to a pulley system, and instead, different members of staff had a specific bell with a unique tone that they listened for so they know if they were being summoned. Unsurprisingly, these were usually found in the butler’s pantry. Today this little room is referred to as a server’s or working pantry and is used to store kitchen appliances and prep for parties.

Sort of like mini elevators, dumbwaiters were popular contraptions in large, vertical homes during the Gilded Age. This made them especially common in elite urban dwellings. One of the main intentions, aside from eliminating the need for running up and down the stairs to get food, was to prevent any major spills caused by mid-delivery collisions between people carrying full trays of meals and beverages. If like me, you actually think dumbwaiters are pretty neat and are wondering why they’re no longer widely used, there are a few reasons.

When designer Brigette Pearce took down the walls in the butler’s pantry, they discovered the home’s original dumbwaiter.

One, kitchens and sculleries weren’t always right next to the main dining room as they are now, so folks had to travel further between the cooking, prep, and eating zones back then. Two, dumbwaiters take up a lot of internal wall space that could be otherwise used as a pantry, home bar, appliance garage, you name it… Another reason is that most families and homes today aren’t run by large staff with designated areas that further enforce class separation and inequity (more on that in a minute). And lastly, they’re expensive to maintain and can be dangerous when not maintained—hence, dumbwaiters a popular haunted house narrative device.

During the Victorian era and into the early 1900s—pre-automobile industry explosion—the most common mode of short-distance transportation was horse-drawn carriage (while railroad travel reigned supreme for further distances). Elegant four-wheel carriages were the popular choice for wealthier families. Because people needed a place to safely store their buggies when not in use, they built smaller houses next to their homes. They’re like garages for cars, but slightly bigger and often with more elaborate ornamentation. They have large arched doorways that span the entire facade. In cities, these little dwellings typically only had room to store one or two buggies. 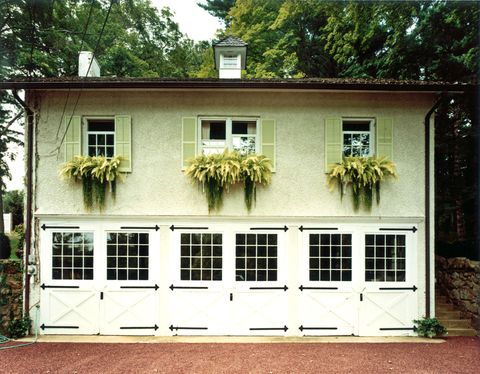 In many cities today, carriage houses have been converted into double or single-level single-family residences. In the case of the Lemp Mansion, which was the palatial estate of brewery barons, there were also several horse stables and several carriage houses behind the primary structure on the property. Today, they’re all gone and a freeway was built in their place in the mid-20th century. As a highly nostalgic person, it’s easy for me to romanticize horse-drawn buggies, but the reality was that those cobblestone roads were full of manure (along with the heavy pollution begot by the industrial revolution). 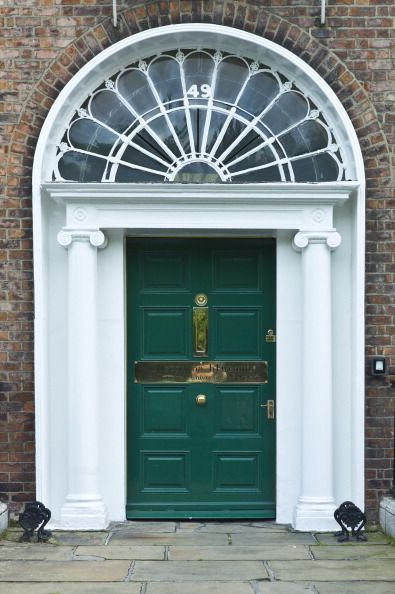 An entry in Dublin’s Merrion Square with wrought-iron boot scrapers flanking the door.

Remember all that dung we just mentioned? Well, there had to be somewhere for people to wipe their shoes so they wouldn’t track the manure throughout the home. Enter: boot scrapers. These little iron contraptions were built into the steps of the front or back porch before the door entrance. They could also be built into the exterior facade of the door, to the left or right of it.

The Staff Stairwell vs. The Grand Staircase

If you’ve ever noticed a second staircase leading to and from the pantry or kitchen and you live in an old home, chances are, they were servant stairs. These were built as a solution to keeping household staff out of sight, especially while guests were over. They’re often much more cramped and steep so that they could fit within an enclosed area. 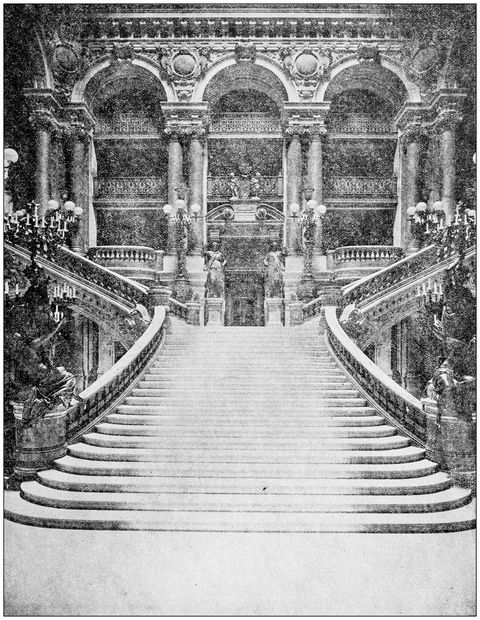 The staircase of Paris’s Grand Opera, a model for dramatic split staircases of the Victorian Era.

Conversely, the same home may have featured another set of stairs that is much more elaborate, especially by the entryway for a grand first impression. Bifurcated staircases were popular in homes that did a lot of entertaining, as they made for dramatic presentation stages. More frequently, you’d see winding stairs with graceful curves that made it easier for aging people to climb, as opposed to the knee-bending angle of their steep straight predecessors. They were also often wide enough for women’s fashionable and extravagant hoop skirts.

Designer Harry Nuriev of Crosby Studios replaced the original glass in this internal window with a fun pink plastic alternative.

If you’ve ever noticed an internal window or piece of glass either covering a partition or at the top of a door in an old home, it could be for a few different reasons. Transom windows were used at the top of doors to let natural light flow into hallways while “windows” between rooms were installed to increase airflow when sicknesses like tuberculosis ran rampant. The former was more common in grand estates while the latter was often a feature in old tenement apartments and boarding houses where poorer folks shared tighter quarters. In fact, by the 19th century, tuberculosis windows were mandated by law, as officials believed that cross-ventilation helped reduce the spread of the disease.

In this mid-20th-century home, Studio Osklo kept the retro-looking eye window on the front door to mix old and new.

Versions of peepholes have been around for centuries, but they were extra popular by the 20th century. They allow the person inside the home to look out and see who’s visiting, both facilitating fuller conversations and providing some security. Later, they became more like little fish eyes on doors so you could see who rang, and today, though some homes still have them, we’ve mostly traded up for a digital camera that enhances safety.

From a contemporary standpoint, by far the strangest thing about the Lemp Mansion is the underground tunnel system in the caves beneath the property (listen to this episode of Dark House for more information). But, in the mid-1800s they were actually a huge luxury, as they were used as a natural refrigeration source. Most people didn’t have quite as elaborate a setup and were in need of an alternative way to store their perishables; ergo, they installed ice doors to accommodate ice deliveries. In the late 18th and mid-19th centuries, someone would deliver the ice, much like the milkman would deliver dairy, and drop the ice near the side pantry where an icebox was stored.

If you live in a home or apartment from the Gilded age and beyond, you may have noticed a little niche on the wall, usually in a hallway. When telephone communication reigned supreme, houses had a designated area for one landline telephone. Since it was the primary form of communication, there was a little built-in niche for the phone, sometimes with a small shelf or desk nearby to take messages (answering machines weren’t invented until 1949!).

Coal became increasingly important during the industrial revolution, as it was the primary mechanism for heating and even illumination. Most families that could afford it had their coal delivered. Basically, the delivery person would make the rounds via wagon, leaving it on the customer’s doorsteps—or, if the family had a “coal door,” slipping it through this small iron passageway into the cellar or closet beyond. Once inside, people then shoveled the coal through a small door or chute into the storage room, coal cellar, or furnace closet. Many of these doors appear discreetly towards the bottom of a home’s facade or around the corner in a less-visible side of the structure. Sometimes, they are even emblazoned with the word “coal.”

Prior to coal as a widespread energy source, most homes were warmed by individual fireplaces in each room. In wealthy homes, this meant that the staff had to come into each room in the morning to light the fire, traversing freezing cold hallways to do so.

Laundry chutes have been around for a long time, and though still popular in homes where the laundry room is in the basement of a tall home, their origin story appears to be a bit more complicated. Again, more common in fancy Victorian homes, laundry chutes were symbolic of good hygiene (a moral statement, in some crowds), as they helped sort soiled linens of healthy folks from those of sick folks. Another old laundry room relic? Water wringers! Before fancy washing machines or even indoor plumbing was invented, staff would have to fetch pales of water and hand wash everything before drying and ironing it all. But back to laundry chutes: Rumor has it they were also a good spying mechanism, as you could hear the echoes of the rooms below and above.

To be fair, these look much more sophisticated than the toggle options rampant today, so it’s no surprise that out of everything on this list, these are the old feature that is still popular and stylish now. In fact, in Europe, they’re still the primary type of light switch. They became popular in the mid-19th century. The one issue with the super old ones is that they can get stuck, which is inconvenient, and toggle switches rarely have that problem. 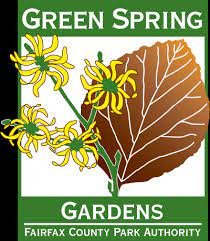 Previous post Garden Lectures Set for January, February
Next post The 12 Biggest Interior Design Trends for 2023, According to Designers

Decorating a new property ordinarily success in an unlimited list of questions. But for lots of, a important challenge is...