Valheim players are building some gorgeous Viking homes, so we’re reviewing them 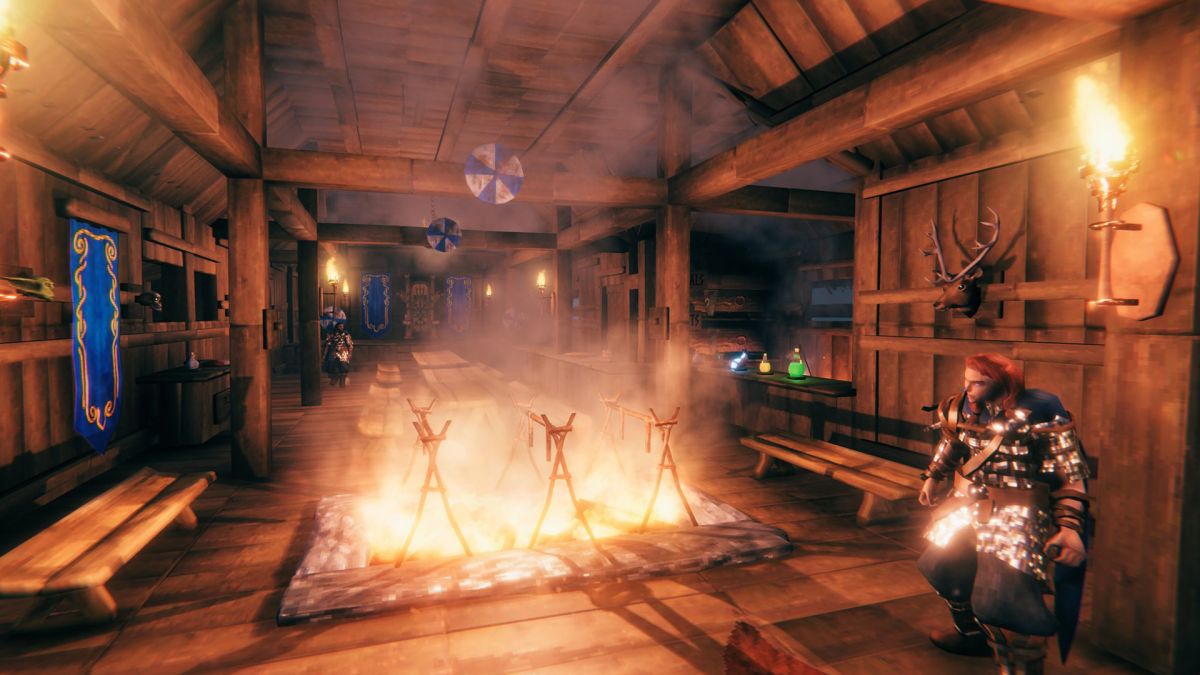 Valheim’s building system is extremely simple. Like most survival games, you’re given a handful of basic building blocks like walls and sloped roofs, and it’s up to you to figure out how to put them together. If you’re like me, that means assembling crappy little cottages that never have enough room for all your chests filled with Greyling eyeballs and other weird knick-knacks you’ve collected. But a lot of Valheim players aren’t so architecturally challenged.

Over the past week, I’ve been frequenting the Valheim subreddit and perusing the Twitter hashtag just to marvel at some of the amazing construction projects players have created. Great halls, mountain fortresses, longhouses—hell, some players have made entire villages that would make Odin beam with pride.

I have a weird obsession with Architectural Digest’s Inside series on YouTube, which takes you on a tour of celebrity mansions. That means I am uniquely qualified to appraise each of these Valheim homes and critique their design. So please join me on this very special episode of Architectural Digest: Viking edition.

Finally Finished my great hall! now to decorate it over time as I venture off to get the recourses. let me know what you guys think? from r/valheim

A great hall fit for gods

Estimated worth: At least one dragon egg.

One of my favorite builds is by redditor SalamanderActual5593, who has created a great hall with a common area that sinks beneath ground level. I didn’t even know that was possible. In the 1960s, these sunken spaces were all the rage, but they soon became a cliché and fell out of fashion. They’re making a comeback now, and SalamanderActual5593’s great house is exactly the reason why.

The effect is stunning and creates an alluringly intimate space. From the outside, the great hall looks pretty humble and unassuming, but once you walk into the main lobby and take the stairs down into the main space, it’s damn impressive. I also have to give major bonus points to the architectural features like the latticework bookending the fireplace. This impressive woodwork draws the eye to the center of the room and up, helping create a feeling of immensity that any Viking would cherish in their halls.

My only critique is that the space is absolutely barren. Decorations, like hanging banners or painted shields mounted on the support pillars, would go a long way in making this great hall feel more lived-in and cozy.

A bronze-age home with iron-age sensibilities

Estimated worth: A lifetime supply of troll pelts.

Seeing the birth of an entirely new architectural trend is a privilege equal only to a blessing from Odin himself. And that’s exactly what ToastedToast15 gave the world when they debuted their incredibly forward-thinking home with a revolutionary aesthetic. See, while most of us were content with our barren, featureless outer walls, ToastedToast15 had the brilliant idea of fixing beams of wood to the walls to create both the illusion of depth and a captivating new motif.

It’s hard to overstate how this exterior wainscoting profoundly elevates this humble cottage. The artistry here is breathtaking, and I’m especially in love with the little touches that prove ToastedToast15 is a medieval Joanna Gaines. The twin dragons flanking the front entryway are lovely, and the elaborate centerpiece that also doubles as a chimney is particularly inspired. My favorite part, however, is the loft bedroom tucked at the back, just behind the mounted head of an angry, heavy metal demon stag.

And our meadhall grew once more! #Valheim pic.twitter.com/1T5Yc0JX5xFebruary 11, 2021

Estimated worth: Two blackmetal axes and a handful of carrot seeds

Over on Twitter, Verča C. has showcased a home that demonstrates exactly how a little decorating can go a long way. Pay attention, SalamanderActual5593. Though we don’t get an actual video tour, the screenshots Verča has provided show how even small spaces can be styled to create a sense of warmth and intimacy. You might not think that Vikings value warmth or intimacy, considering they’re most well known for being violent northerners who butchered half of England in the early 800s. But just because you’ll split a man in half and turn his children into thralls doesn’t mean you don’t have good taste.

That’s exactly what Verča demonstrates here in how she cleverly uses the color blue to contrast the warm earth tones of her house’s wooden interior. The painted shields and gold-embroidered banners add a wonderful touch of elegance to the main living area, but it’s that delectable raven-carved throne that really binds the space together. Simply stunning.

Solo base I made with Tavern & Cellar from r/valheim

A refined suite for the bachelor brigand

Estimated worth: A single tamed boar

You can tell just by Vettlen’s attire that his axe isn’t the only thing that’s looking sharp. Well-dressed men tend to have well-dressed homes, and Vettlen’s three-story cottage does not disappoint. What stands out to me is the ingenious use of space and the clean separation between work and relaxation. When first stepping through the front door, you enter into a functional mudroom replete with a workbench, stacks of spare wood, and extra shelving for all that treasure he drags through the door. Step into the main living room, though, and it’s a cozy Viking paradise with a roaring fire and loft bedroom overlooking everything.

There’s a lot to focus on, but I want to point out Vettlen’s great use of space. A lot of Valheim players (myself included) tend to chuck our storage chests and workbench into one corner and our bed in the opposite. But I really like how Vettlen hides his second workshop with the stairs leading to the loft, helping establish that all-important separation between work and life. The real coup de grace, however, is the cellar which houses all of his chests and a few curiosities like rare mushrooms. I can’t imagine how hard it was to dig out a whole basement level, but the result is really fetching.

It’s a really great space, but I’d be remiss if I didn’t criticize the portal placed right next to the bed. It’s a shame that after such a considered approach to structure and separation, Vettlen would place what is basically the Viking equivalent of a helicopter pad right next to where he sleeps. I’m not sure where the portal leads, but unless it takes you to a secluded hideaway built on top of Yggdrasil’s highest branches, I have to call foul.

It took almost 5k wood and 2 whole days to build this fort. I’m proud. from r/valheim

A chalet that makes Valhalla look like an outhouse

Estimated worth: No less than two Surtling cores

PapaTomato spent two days harvesting over 5,000 pieces of wood to make this extravagant and enormous hunting lodge, and the end result is absolutely worth it. Though it defines many of the motifs that define Viking architecture, I’m willing to forgive this sin because the interior is so damn impressive. This place has everything: a bar, an expansive dining area, workshop, multiple bedrooms, and even a stunning ocean view.

What works here is the open concept layout, which helps tie all these different spaces together into one cohesive whole. And the vaulted ceilings are a lovely contrast to the snug common areas. Also the second-floor balcony is a lovely addition.

Again, my biggest critique is that this chalet currently feels vacant and empty. The bedrooms, in particular, are lifeless. PapaTomato and their friends would do well to add personalized décor that makes the space feel lived in. But the architectural bones are as sturdy as a two-star skeleton.

And now it’s your turn

If you have a Valheim house you think is particularly inspired, you should send us photos in the comments. Better yet, join us on the PC Gamer forums where we have a special thread dedicated to showing off your hot, hot property. If your build is particularly impressive, we’ll add it to this article.

Decorate your home with tapestries