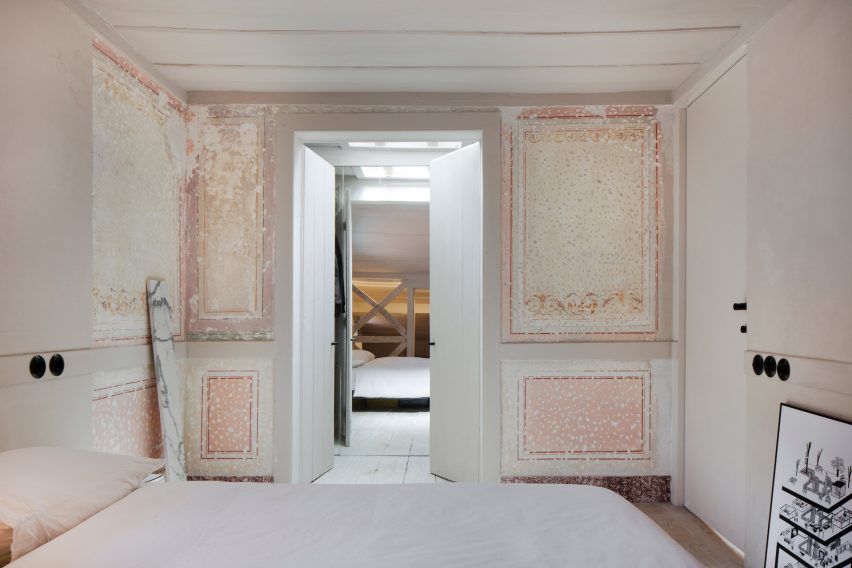 A holiday home in northern Italy that was decorated on a budget and a Hackney apartment with exposed concrete walls are among the residences in this lookbook, which showcases interiors that have been left purposely unfinished.

Peeling wallpaper, floors that have been left untreated and hanging cables give character to these interior design projects, which look as though they’ve been abandoned halfway through decorating.

By stripping back the properties down to their shells, the interior designers have given the occupants of these homes the chance to complete them according to their own tastes and resources – whether that be filling them with quirky items or keeping them minimalist.

This is the latest in our lookbooks series, which provides visual inspiration from Dezeen’s archive. For more inspiration see previous lookbooks featuring colourful living rooms that make a statement, homes with walk-in wardrobes and beautiful brutalist interiors.

The bedrooms in this fifth-floor Lisbon apartment feature restored Riga pine floorboards that have been left untreated, matching the unfinished quality of the walls.

Elsewhere in the residence, Lisbon-based Studio Gameiro restored several aged frescos found throughout the 1819 building and left the ceiling exposed in places to reveal its original timber support beams.

Find out more about Lapa Apartment ›

This apartment in Hackney was overhauled from a lacklustre and light-deprived home by London-based architecture studio Merrett Houmøller Architects.

Hoping to give the space a raw aesthetic, the studio removed the existing wallpaper which revealed the concrete blockwork underneath. The decor has been limited to a handful of industrial pieces such as an exposed-bulb pendant lamp.

“Stripping the walls and ceiling back to the shell was essential for adding character that never made it into the original new build,” explained the studio.

Find out more about Martello Street ›

Diplomat Apartment, Italy, by 02A

Situated on the ground floor of an early twentieth-century building in Rome’s Flaminio district, this one-bedroom flat has been left intentionally unfinished by Italian architecture and interiors studio 02A.

The studio hoped that the unfinished look, which is achieved through exposed plaster walls and mismatched furnishings, would spark curiosity and show the beauty in imperfection.

Find out more about Diplomat Apartment ›

Italian studio Archiplan made very few changes to this apartment, which is situated in a 15th-century building and designed for a couple who wanted a holiday getaway.

Instead, the studio chose to honour its timeworn aesthetic by keeping several of the property’s original features, including a number of frescos. Areas that could not be salvaged are covered in plaster or painted in a minty green shade to complement the bucolic scenes depicted on some of the walls.

Find out more about Apartamento Brolettuono ›

Brazilian studio SuperLimão renovated RF Apartment, a residence in downtown São Paulo, by rearranging the layout and stripping it back to reveal several historical details found in the modernist building.

The exposed pipes that run along the walls and ceilings were painted in pastel hues while the edges of the entryways were peeled back to leave large chunks of plaster and brick exposed.

Find out more about RF Apartment ›

Find out more about Gale Apartment ›

After knocking through a number of partition walls that divided this 65-square metre home, Spanish architecture studio CRÜ lined the living zones with different warm-hued tiles, with each tile type defining a particular area.

In the kitchen, white-painted exposed brickwork was paired with terracotta tiles that have been applied back to front, so that the ribbed texture on their underside is exposed. These are set off against a white kitchen island that also serves as a breakfast bar.

Find out more about La Odette ›

Aptly named Tokyo Loft after its positioning on one of the uppermost floors of a 1980s housing block in Tokyo, this apartment features raw concrete walls. Expansive windows allow for plenty of natural light and lift the otherwise industrial mood.

Streaks of white paint were added to the walls and ceilings using a technique that involved spraypainting A4-sized sheets of resin against the surfaces, then removing them to reveal a spiral-like texture intended to resemble Japanese Washi paper.

Find out more about Tokyo Loft›

Intended to provide the occupants with both a place for quiet reflection and entertaining guests, the house has a main space at its core for cooking and socialising.

Here, exposed concrete walls and floors are matched with visible pipes and a beige colour scheme. Two sides of the room are glazed, while the other two are solid, allowing for the display of artwork.

Find out more about Vivienda Texturas ›

Husband and wife Sandy and Sally Rendel designed and built Slot House, a 2.8-metre-wide skinny house as a “functional” yet “delightful” London residence.

Find out more about Slot House ›

This is the latest in our lookbooks series, which provides visual inspiration from Dezeen’s archive. For more inspiration see previous lookbooks featuring homes with glass extensions, well-organised bedrooms and granite kitchens.