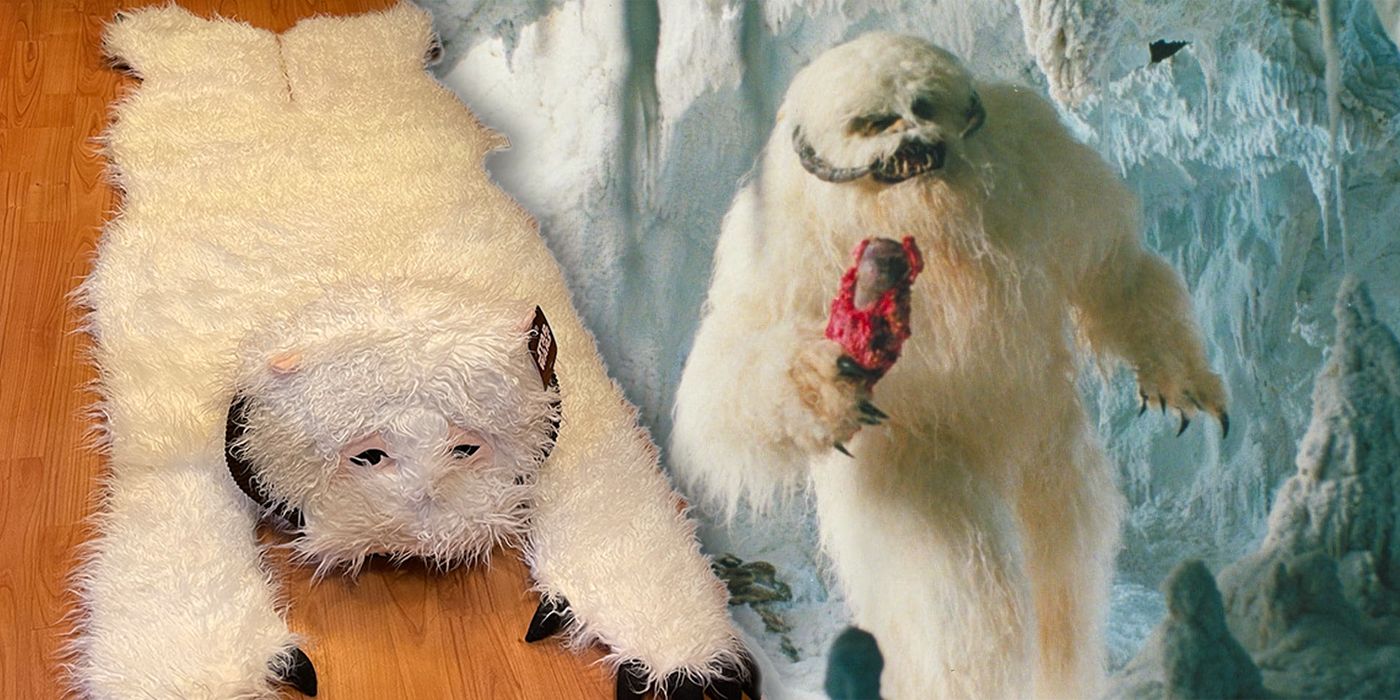 One of the newest additions to the world of Star Wars collectibles is the next generation of furry rugs inspired by The Empire Strikes Back’s wampa.

From the icy tundra of Hoth comes the latest incarnation of the fan-favorite Star Wars Furry Wampa Rug.

Introduced in 1980’s The Empire Strikes Back, the wampa is a fur-covered monster that resides on the snowy planet of Hoth, preying on whatever creatures dare to traverse the frigid terrain. Notably, the beast even tried to make a meal out of Luke Skywalker, only to have its arm severed by the fledgling Jedi Knight. However, the rug version — manufactured by Jay Franco and sold by FUN.com — is far less menacing.

Now, for $59.99 USD, you’re not going to get what looks like the equivalent of a high-end bearskin rug modeled off of a wampa. The face isn’t quite as ferocious as the real (fictional) thing but more of a teddy bear-esque recreation with soft horns. That said, the final product is still a high-quality piece of officially licensed merchandise that can be used to accent your living room, bedroom, office or wherever you wish to add some Star Wars flair.

According to FUN.com’s product description, the rug measures 54×26 inches. However, the one used for the purpose of this review actually came in at 60×27 inches, which also takes into account the length of the claws at the head and tail ends.

RELATED: Star Wars Infinities Shows How Darth Vader COULD Have Been Redeemed

The description also boasts a blend of acrylic and polyester for the fur, polyester fabric and fiberfill and anti-skid backing. As for the fur, it’s very soft, with a texture reminiscent of a shaggy bathroom rug. The anti-skid backing, meanwhile, holds up relatively good on most surfaces, though the rug tends to slide a bit on hard floors when brushed up against by foot traffic. For those who want their wampas to stay completely stationary, you may want to consider purchasing an additional rug pad to place underneath.

From a practical standpoint, the rug is perhaps better served as decoration than for functional purposes. For instance, the shaggy nature of the fur makes it a bit difficult to vacuum after being exposed to dirt and pet hair. However, if keeping your wampa in pristine condition isn’t a concern, the soft stuffing inside the head makes it excellent for younglings to lounge around on or even use for naps.

The aforementioned $59.99 price point is likely of particular interest to those familiar with past incarnations of the Star Wars Furry Wampa Rug. Prior to Jay Franco buying the rights to manufacture the rug, similar products would retail for $129.97-$290. The lower price point also comes with an increase in the quality of the build based on past reviews, with FUN.com currently serving as the exclusive license holder of the rug for one full year.

The Star Wars Furry Wampa Rug retails for $59.99 and can be purchased directly from FUN.com.

KEEP READING: The Mandalorian Is Structured JUST Like a Video Game – So When Are We Getting One?

Jon Arvedon is CBR’s lead news editor and began working for the site in 2017. He’s been an avid superhero fan since he was a young child, though it wasn’t until much later in life that he finally began venturing into the actual comic books that made those characters so popular in the first place. Nevertheless, he immediately developed a strong passion for the medium and began aggressively expanding his knowledge, using any and all downtime at his old office job to scour the depths of Marvel Unlimited, comiXology and the occasional wiki page to help fill in the gaps. His love of comics is rivaled only by that of his love for Star Wars. If you’re so inclined, you can follow Jon on Twitter at @JonArvedon.