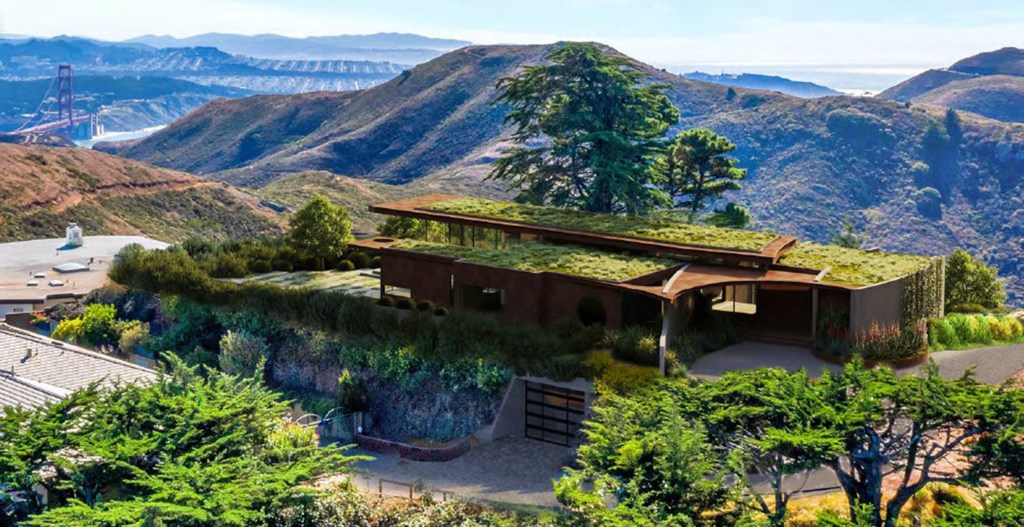 Some Sausalito residents are opposing a plan for a two-story ridgeline home that looms over the Golden Gate Bridge and about 80,000 acres of federally protected open space.

The neighbors argue that the proposed 6,590-square-foot residence with a subterranean three-car garage at 99 Wolfback Ridge Road is too large compared to surrounding houses.

Bruce McMillan, who can see the story poles from his front yard and driveway on 1 Canto Road, said he is concerned the project would set a “dangerous precedent” for other developers to build.

“What is going to happen is more developers are going to try to see who can get the biggest ‘McMansion’ approved,” McMillan said.

He said the renderings provided by the developer are misleading. He also said the project would obstruct panoramic views of the Bay Area, cause environmental concerns and be an eyesore for hikers and tourists.

“They are going to try and say it’ll be hidden by bushes and trees, but these are not windows we’re talking about — this house is mostly glass walls.”

Neighbors also argue the one road is too narrow for excavation tractors or dump trucks to navigate.

The proposal was set to be reviewed by the Planning Commission at a public hearing on Wednesday, but the hearing was canceled because the Zoom meeting location was not posted on the agenda, said Lilly Whalen, the city’s community development director.

She said the item will be moved to the Planning Commission meeting on Feb. 17.

The co-owners of the property — identified in city documents as Tsedendamba Tserenpuntsag and Bazarsad Oigonjargal — have been trying to develop the site for more than a year.

The first proposal was rejected by the Planning Commission over concerns about the size and visual impacts, said Brad Evanson, a city planner. He said the size has been reduced since the first proposal.

Scott Couture, the architect hired to design the home, says it will be partially underground to avoid disturbing neighbors’ views. He said the tinted windows would not reflect sunlight, the design blends into the surrounding area and the project aims to protect the Monterey pines and cypress trees on the property.

Michael Rex, an architect, wrote to the city to oppose the plan. He said the applicants have not responded in a meaningful way to the concerns raised by the residents and the commission.

“After squandering this opportunity, the time has come to deny the project, making it clear that only a smaller home, one that has less glass and preserves the special views enjoyed by others, will be approved on this very prominent site,” Rex wrote.