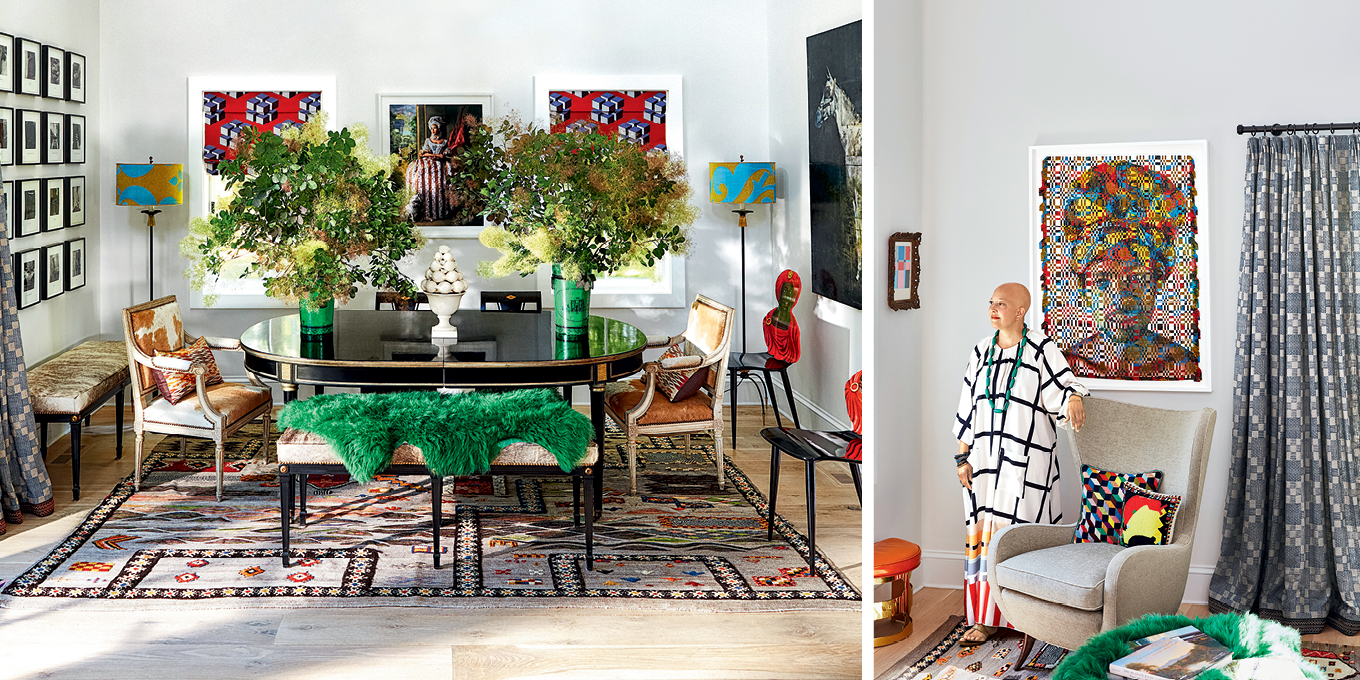 Her new home in New York’s Hudson Valley is full of old favourites—an ode to all the things that, for her, spark joy. Take, for example, the Fornasetti chairs, which feature two African men in traditional Moroccan dress. “I think I first saw them in the early ’90s,” says Bridges. “They’re classic, and they just come with me wherever I go.”

The residence, a tarblack beauty with nine-metre ceilings, is hard to miss, located as it is on a road of traditional farmhouses. It is the first home that Bridges has ever lived in that she built from scratch. She spent her childhood in an old stone house in Philadelphia, and her other current dwellings, in Harlem and Iceland, each come with a historic pedigree. “I just always wanted to have a full-on design build,” she says. “One where I could really sort of control the entire vernacular.” Bridges started construction on the property in 2018 and moved in a year later.

A perennial member of the ELLE Decor A-List (ELLE Decor’s annual roundup of its favourite designers), Bridges grew up in the era of modern R&B and hip hop, when old soul tunes were constantly being sampled, resurrected and reimagined. Similarly, her house in the Hudson Valley samples from her time spent in Iceland: The dark colour of the exterior is reminiscent of Budakirkja, a favourite church of hers on a remote peninsula there. Bridges has long admired the way the church’s black-painted facade stands out against its snow-white environs.

Although her home sits on about half a hectare of land, Bridges was disciplined in designing the footprint for it. Rather than go oversize, she opted for only what she needs—which includes a pool house. “The house is only [148.5 square metres], and I decided I would not go over that,” she says. “I wanted to, but I just decided that I really don’t need more than that to live.”

There are two bedrooms in the house: There’s a guest bedroom with an ensuite bathroom, and on the second floor, beyond her study, Bridges has set up a kind of atelier that has a main bedroom whose walls are covered with classic paintings from the Hudson River School, an expansive main bath and a sitting room that is a playful mirror image of the one depicted in a Mickalene Thomas print hanging on the wall. She painted that room a serene lavender by Farrow & Ball.

Art is everywhere, and the abundance of paintings and prints on the double-height walls keeps the home consistently compelling. There’s a Jean-Michel Basquiat print on one wall and a Renaissance-style image by Haitian artist Fabiola Jean-Louis on another. A mural covers one side of the main bathroom, with parts of it lining the inside of the medicine cabinet. Like a library of first editions, Bridges’ walls vibrate with works that tell the story of her heritage and her travels and the friends she has made along the way. Flapping in the wind on the front of the house is a red, green and black American flag—a replica of one created by artist David Hammons in 1990 to celebrate the election of David Dinkins, New York City’s first Black mayor. “I proudly fly my flag as a reminder of America’s deeply troubled history and the need for real and meaningful change,” says Bridges.

Throughout the house, there are pops of her signature Harlem Toile de Jouy pattern. Bridges’ iconic design remixes the traditional toile motif of the French countryside with vibrant scenes of African-American life. It is most often seen in the form of wallpaper (and has frequently been featured as a backdrop for Gayle King’s Zoom telecasts on CBS), but it also adorns such products as umbrellas, glasses and clothing. This last September, Bridges launched Harlem Toile on classic Converse sneakers.

But perhaps the home’s most alluring features are two enormous mobiles that hang in the living and dining area, where Bridges likes to gather with friends around the table and spend long nights in front of the fireplace. “I had mobiles in my childhood bedrooms and then in my college dorms,” she says. “I’ve always loved them.” The real magic happens when the sun begins to set and the mobiles cast shadows that fall in arcs all around the house.

It ’s hard not to notice the smile Bridges wears as she shows visitors around her home; perhaps it’s because she feels joy at being both the hired designer and the satisfied client. “I work on big houses all the time for my clients—elaborate [900-square- metre] homes all over the country,” she says. But it ’s very different to design something for herself. “This is small and simple and open,” she says. “It’s music, it’s art, it’s culture. I just filled it with things I love.” Next post How candles became my unexpected go-to during quarantine

Designing a “warm” home is a common obsession for decorators and interior designers. But with the uncertainty of the energy bills and the arrival of the colder months, that warmth ceases to be an abstract concept; we actually need our house to be warmer and to remain that way for longer. And even if the […]

Too many decorations, not enough space. It’s a tale as old as time. November rolls around and you frantically hit...

Fairy lights twinkling in the backyard. Family and friends laughing around the table. The aroma of a delicious home-cooked or...