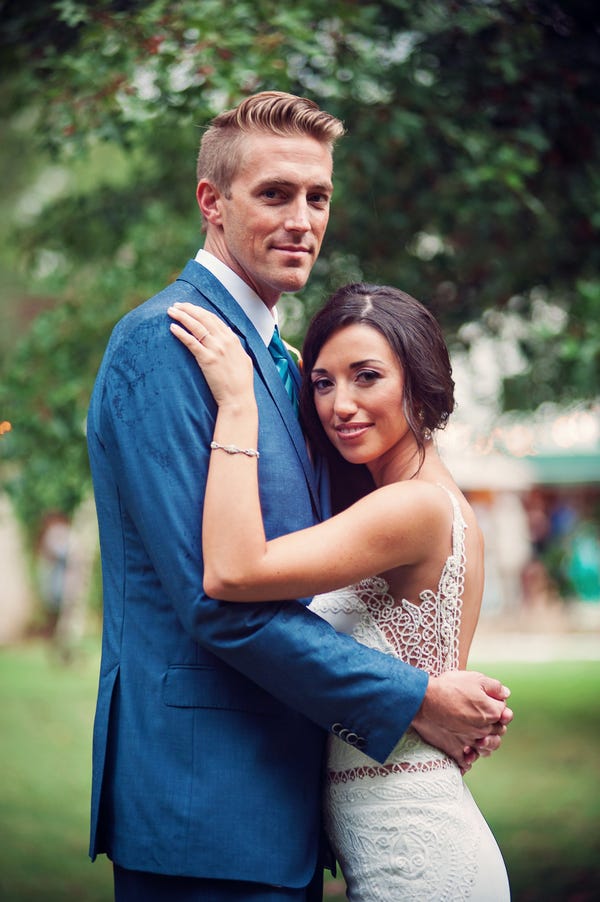 When Kenny Simpson and Krystle Moore got married in March 2014, they were under a time crunch to take advantage of a tax benefit on the house they had accidentally bought, two years prior, due to a fax error — and were currently in the process of selling.

“Everybody thinks it’s the most romantic story ever,” Moore joked to Insider.

In the US, the Taxpayer Relief Act of 1997 reduces capital gains taxes on the sale of a personal residence if the homeowners have been residing there for at least two out of the last five years. While single homeowners can only exclude $250,000 of capital gains, this exemption totals $500,000 for married couples.

“Krystle’s like, ‘I’m not getting married.’ I go, ‘Here’s the tax bill.’ And she goes, ‘When’s the appointment?'” Simpson recalled in a recent interview with Insider.

Just before the sale of their first fix-and-flip closed, the couple headed down to the courthouse to make it official — and to walk away with their half-million-dollar tax exemption. Moore made it a point to call the wedding planner before they arrived at the courthouse, and they held an official ceremony six months later.

Today, the couple own 47 units across four different properties with a total market value of almost $19 million, according to documents verified by Insider. This portfolio nets them over $360,000 in annual cash flow, they said. Simpson and Moore’s partial ownership in a few other real estate investments also brings in about $24,000 annually, they estimated, bringing their total cash flow to nearly $400,000 a year.

The 42-year-old Simpson and 38-year-old Moore — who collectively have 35 years of real estate industry experience under their belt — currently reside in San Diego with their two daughters, aged two and four. Simpson is now focused on residential real-estate financing at his firm, The Simpson Team, while Moore heads her firm, Pacific Shore Capital, dedicated to commercial financing. Each firm has funded over $1 billion in loans, according to their websites.

Getting their first house due to the seller’s error

Simpson and Moore met in late 2008, during the deepest depths of the housing crash. At the time, Simpson worked as a residential loan officer and Moore as a mortgage broker. Both had also had real estate ambitions prior to meeting.

In 2011, the couple began looking for a potential investment property together. They were originally aiming to buy a fourplex that they could simultaneously live in and rent out, but were unable to find a one that was within budget.

Finally, after scouring every listing and rental posting in their desired neighborhoods, in 2012 Simpson and Moore landed on a house in an area they loved, San Diego’s South Mission Hills, and submitted an offer for the $545,000 property with a 3.5% down payment. Unfortunately, another interested party was able to offer 40% of the down payment, so Simpson and Moore naturally assumed that the seller would go with the less risky buyer.

But during the offer process, the seller signed Simpson and Moore’s counteroffer with the intention of faxing it to her real estate agent to counter the other party. Instead, she accidentally faxed it to Simpson and Moore’s agent — meaning the couple were in contract by default.

“So we got in escrow by accident and got this house just by someone else’s mistake,” Moore recalled.

Over the next two years, the couple put in $300,000 in total to renovate the house, with $60,000 coming from their own pockets and the rest from a construction loan. Both still held their full-time jobs, so they would squeeze out time on nights and weekends for home renovation, with Simpson estimating they worked seven days and between 80-to-100 hours a week. While the couple designed everything themselves, they hired a contractor to complete the actual construction.

According to Simpson and Moore, they set a neighborhood record when they sold the house in 2014 for $1.34 million, walking away with about half a million dollars in profit after sinking in around $80,000 total of their own money.

Even though they’d received a hefty paycheck from the sale of their first investment property, Simpson and Moore still couldn’t afford to buy an apartment building on their own thanks to high prices in California, so they ended up partnering with a couple other investors on their next few deals in San Diego.

These buildings were so under-rented that the bank required about a 30% loan-to-value ratio, meaning the couple had to come up with 70% of the down payment. Moore recalled obtaining hard-money private loans with around 8% to 8.5% interest rates, doing renovations “as quickly as humanly possible,” then refinancing the properties. These first few partners mostly provided money for the projects, she added, and allowed Moore and Simpson to oversee the budgets, costs, and renovations, which she preferred.

“We flipped the first few properties — put a little bit of lipstick on the units and sold them. I call it trading up — you buy, renovate, raise the rents, sell, and then trade up to the next one — the BRRR model in apartments,” Moore explained.

Once the couple had accumulated enough money to buy properties themselves, for which they generally put around 35% down, they started doing more extensive renovations.

“We wouldn’t just do lipstick,” Moore said. “A lot of times we would actually vacate the property and completely renovate the units inside and out. Then we would refinance, pull cash out, go buy a property with that cash out, and then sell the property again like a year later, then take that cash and move it into another thing. So I would actually get two purchases out of one building using that method.”

Simpson and Moore sold their first few buildings, rather than holding them in their portfolio, because they were focused on growing, trading up, and building up their cash.

“Once you get to a certain amount of units — like we’re pretty much hitting it right now — you can grow what we call ‘organically,’ meaning that you could still probably buy a building every year or two, without any money coming from you. It could just come from equity in your buildings that you already own, and cash flow,” Moore explained. The couple’s average hold period is around two-and-a-half years, but going forward they’re more focused on keeping their buildings for a longer time period.

According to Simpson, the best way to source deals is also the most obvious — by having a good relationship with real estate brokers. When a potential deal is on the table, Moore calculates the property’s net operating income, or NOI, by subtracting certain expenses like actual utilities, which she increases every year due to inflation, a management fee, fees for repairs and maintenance, and replacement reserves for emergency costs like AC repair, from the gross income. Usually, she looks for a minimum 5% return on her investment.

Moore then runs the same calculation using market rents versus expected rents based on her business plan. Renovations usually cost the couple around $35,000 per unit to completely replace kitchen cabinets, countertops, flooring, and appliances. She’ll only invest if she can get a minimum 5% return on her money within one to two years, and she’ll only make repairs if she can completely recoup the $35,000 in rehabilitation expenses through increased income within the next two-and-a-half years, at maximum.

The couple can also make additional revenue through bonus amenities like laundry, a pet fee, storage, and parking, but Moore never anticipates these potential income sources, even in her most aggressive calculations. Simpson and Moore are also well-versed in squeezing value into their properties — for instance, simple additions like in-unit laundry and in-unit AC can easily command the couple an extra $300 in rent per month, and converting a storage closet to a half-bath or a nonfunctional room into an accessory dwelling unit or studio can also significantly increase rental income. When those updates are applied over multiple units, a building’s value can easily increase by $1,000,000 or more, Simpson said.

If they intend to sell a property, Simpson and Moore generally only make improvements to between 60% to 65% of the units. “Leave a little meat on the bone for the next buyer,” Moore explained. “Frankly, you can sell a building based on those rents that you’ve achieved. So you don’t have to go do 100% of the work; you can do 60% to 65% to prove that it can be done and then let the new buyer come in and do the rest of the work.”

The couple’s real estate portfolio currently include a fourplex vacation rental, two multifamily apartment buildings, and a cannabis manufacturing warehouse they’re in the process of selling, the proceeds of which will go towards purchasing more apartments.

Other ventures and investments

Besides the buildings they own outright, Simpson and Moore are also partial owners in 259 units across three apartment properties in Texas and Florida through a syndication, where their weighted average of percentage ownership is around 2.5%, they said. They’ve invested around $350,000 in total into these ventures, and estimate their annual returns to be nearly $24,000.

But it hasn’t always been smooth sailing. The couple have lost an estimated seven figures along the way by trying “to chase sexy things instead of just sticking to the bread and butter of multi-family,” said Simpson, highlighting failed investments in construction and marijuana properties.

“You can chase these things that seem a little more sexy and cool and fun to talk to people about, but if it’s not your expertise, you’re probably putting yourself in a very risky position,” added Moore.

In the future, the couple’s long-term goals include continuing to grow their real estate portfolio, expanding their coaching business, and eventually handing their own investments full-time.

But first, the couple hopes to hit their short-term goal — buying a primary property to reside in. “We rent, which is funny,” said Simpson.

The couple has decided to forego buying a house until their cash flow completely covers their entire lifestyle, which Moore estimates they can accomplish by acquiring just one or two more buildings within the next two years.

“It would be nice to wake up one day, own a house, and your cash flow pays all your bills and your lifestyle,” said Simpson. “And then you go to work to earn money to buy more buildings.”