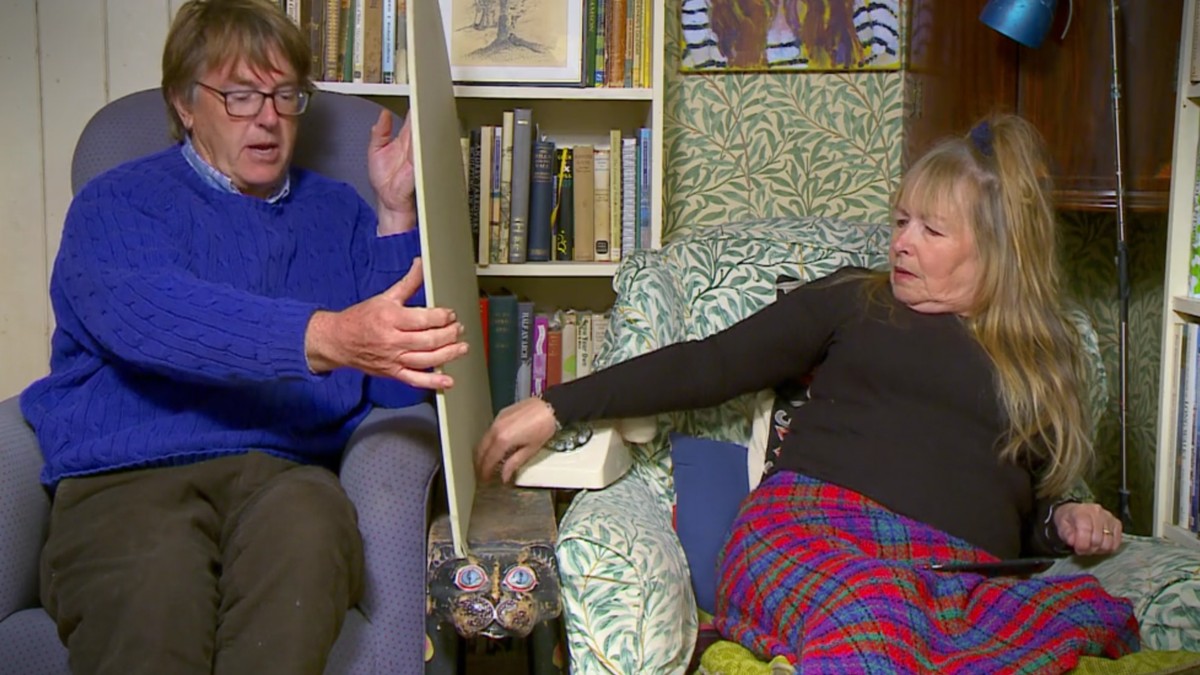 All images courtesy of Channel 4

There’s a special familiarity that you feel as you watch Channel 4’s Gogglebox – it has this inimitable, endearing warmth that makes you feel like you’ve had a brew in every cast member’s front room, without ever meeting them.

But not every cuppa is imbibed in the salon of dreams, and the homes of the Gogglebox cast are as widely diverse as the people who sit in them. From a fuck-off detached in Essex to Jenny and Lee’s cosy caravan, each residence is a unique snowflake that’s begging to be assessed, and then pettily ranked, by me.

Disclaimer, though: everyone is entitled to their own personal taste when it comes to home décor. I’m not Laurence Llewellyn-Bowen and, unless I’m undertaking a two-week long renovation of a mansion on The Sims, I don’t profess to be.

With all that said, this one’s a disaster.

Doctor’s waiting room grey carpets meet beige walls with no decorative items; but the real nemesis here is that sofa. If you’re going to take over your front room with a big clobber corner suite you’d at least make it one that’s a bit less of an eye sore, wouldn’t you? The Christmas cracker patterned cushions are the absolute nail in the coffin.

The chaotic eyesore of The Michaels’ lounge is confusing initially, but once you learn that patriarch Andrew Michael ran as a UKIP candidate in the 2015 election it all becomes clear. Décor as dreadful as the politics.

Grey velvet sofas matched with… gold baroque print cushions…  finished off with an ornate fuchsia print armchair? It’s like playing the interior design version of that game where you write a bit of a story and then fold the paper over and pass it around to the next person. And that game is shit.

Think I can spy a white piano in the background, which is admittedly iconic but you can’t polish a turd.

The vibe here is very ‘third year, moved out of the city centre to get a cheaper house with the only flatmates you didn’t want to totally murder at the end of the last semester.’ Big pile of Dominos Pizza leaflets gathering dust lies just out of shot, I know it.

The Siddiquis are a national treasure; their living room certainly is not.

We don’t see much of it, but what we do see is sofa. And a lot of it. I’m quickly running out of things to say about gargantuan leather corner sofas, but rest assured I hate them.

My mate once said to me Dave and Shirley have huge swingers energy, and that statement now lives in my mind rent free. Swingers or not, though, this room is dragged down by that kitchen door. Far too close for comfort. Imagine trying to get engrossed in a boxset only to have that door barged open every five minutes because someone’s got an urgent hankering for a scotch egg. I’ll give it a miss, thanks.

There’s a bit of a B&M Bargains showroom feeling with this one that I can’t shake off, though it looks cosy – I’ll give them that. But they recently redecorated and the new bogey green and grey colour scheme just makes their whole living room feel like Holland & Barrett. Particularly hate that the green of the velour curtains isn’t the same shade of green as the cushions.

Get a new colour scheme and we’ll talk, ladies.

You can barely see anything in Paige and Sally’s Birmingham house besides the eye roll of a crushed velvet sofa. Letting them off from their house of mediocrity because I just KNOW that Sally’s got the good biscuits in her cupboard: chock full of Viennese chocolate sandwiches and Jammie Dodgers with not a Rich Tea in sight.

Again, not much on show here, but what I can see I’m at peace with. Sofa looks comfy and squishy with no leather in sight, cute house plant, some nice throw pillows and a clean wall with grey trim. Feeling very neutral on this one.

It’s all just very Mrs Hinch, isn’t it? Too chrome. No personality. Whole room is just begging for one measly drop of colour.

Feels like you’re at your posh nan and grandad’s for a big Sunday roast in the best way possible. The kind of living room you’d be absolutely made up to have Christmas day in. Cosy and clean, but not too clean. They’d still let you eat crisps, despite getting a few crumbs on the carpet. Which is all you can ask for really.

Slap bang in the middle of the ranking is the latest family added in to the Gogglebox mix: The Baggs family from Essex.

Not sure if it’s the Essex setting that’s doing this for me but they make me feel like I’m in Pam and Mick’s Billericay house from Gavin and Stacey, and that’s the kind of instant familiarity I respond VERY WELL TO!

It’s very “DFS-advert-in-the-middle-of-an-X–Factor-auditions-episode” but it’ll do. Sofa looks stunning, proper big cushions to sprawl on on a hungover Sunday and watch five episodes of Come Dine With Me. The sooner they take down that weird flower canvas the better, though.

Amira’s bedroom just radiates nostalgia to me. It’s the bedroom of your best mate when you’re 15, round for a sleepover; the room where you talk about who you fancy in your maths class; the room where you pre-drink a dreadful shitmix of Archers, Apple Sourz and lemonade before decanting it into a plastic bottle, smuggling it into a taxi and attempting to get in to a club called something like “Laser” or “Ignite” with the ID of someone’s 27 year old brother; the room where you lie all day watching every Twilight film back to back, screaming out of genuine fear because every time you forget quite how harrowing that CGI baby is. What a room!

I always assumed they were at one of their flats – it’s only when I did some research for this that I realised Mary and Marina live together in a retirement home. This just made me love it further. Driving round after school to visit with your mum. Loads of nice oldies, ginger biscuit and mint viscount buffets, and nothing on the TV but The Chase. Feels warm.

Stephen moving out of his old boring grey house into this chicly decorated new one has served him well. That mustard couch is the best couch on this list, end of.

As a native Manc, my bias is showing me up here. But this room feels like home to me – just full of northern charm. Curling up with my mum to watch Corrie surrounded by dogs and cake. Heaven.

Takes me to that 2003 caravan holiday to Skegness you got forced on with your whole family, where it pissed down for the whole week and you did nothing but lose at Monopoly and eat Walkers Cheese and Onion. Speaking from the year 2020, I must solemnly say: take me back.

Praise the Lord, we’ve got COLOUR! Vibrant, fun and easily the best novelty mug collection this side of the Atlantic. Pete’s shark one takes the coveted Best Mug crown but Sophie’s cute avocado one put up a decent fight.

I live with an avid crocheter and our front room is swathed in crochet blankets and wall hangings, so this Manchester woolly haven feels like a home from home. Uber cosy and I love the wall of books – it feels like a room I’d spend absolutely hours in pretending to read and relishing in looking cultured and studious. Huge fan of the rustic trunk they use as a coffee table, and there’s a great collection of socks going on here too.

There was no question that Giles and Mary would take the top spot here. You’d be hard pressed to find a more hotly discussed Gogglebox conversation piece than their infamous matching print wallpaper and armchair. I love the audacity and optical illusion vibes of it all.

This room just oozes character and I love that the quirks and eccentricities of Giles and Mary are reflected in the décor. Every time I look at their front room I notice something new. Today’s new find is that the little table that’s in between their chairs has the face of cat. This I will never unsee. And now neither will you.

The opinions expressed in this article are the writer’s own and do not reflect the views of Her Campus. Have you ever woke up on a Saturday morning thinking it is time to change your room? No? Okay, how about laying on your bed one afternoon and deciding your room could use a change? Maybe […]

A holiday home can mean a lot of things in terms of preparations: adorning the front porch with a wreath...