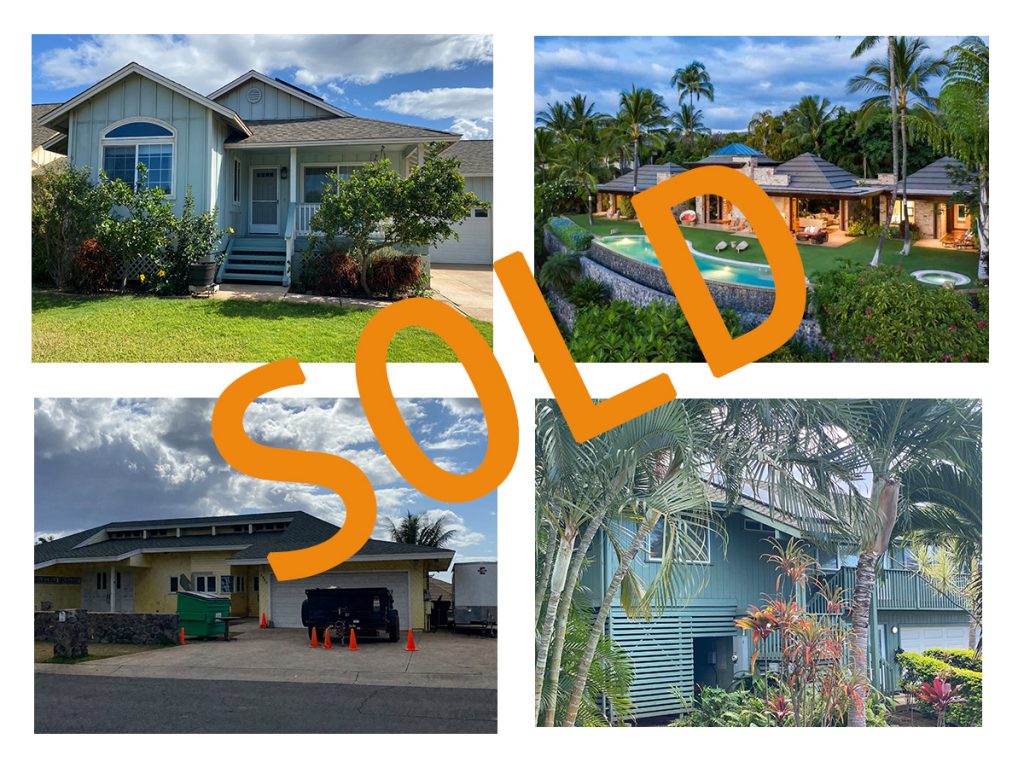 In early January, longtime Maui real estate agent Leslie MacKenzie Smith listed a house that was “nothing fancy” in central Kīhei for $850,000, and after 25 showings in two days she had 13 offers.

“I don’t think I ever had 3 offers on a house before,” said Smith, who works for Wailea Realty Corp. & Windermere Real Estate.

While Maui tourism and many visitor-associated businesses are struggling to climb to pre-pandemic levels of a year ago, the Valley Isle’s real estate industry is surprisingly booming.

“This is the strongest sales activity I have have seen in over 30 years of selling real estate on West Maui,” said Mary Anne Fitch, a real estate broker with Hawaiʻi Life.

And, it’s not just real estate in Kīhei or West Maui that is flourishing. All areas of the island have experienced high levels of sales activity this year.

“We were hoping for a ‘V-shaped’ recovery, but it’s been a beautiful ‘U’,” said Reta Chin, AVP, Fidelity National Title & Escrow.

As of March 6, there were 828 pending sales of Maui real estate. The pending sales figure includes all types of Maui properties (residential, homes, condominiums, commercial and timeshares) that are in escrow.

Note: All data in this story is from REALTORS Association of Maui, which is deemed reliable but not guaranteed.

That’s 194 more than the number of pending sales of a year ago (Feb. 26, 2020), when Maui’s tourism and economy were thriving and when most people had never heard of COVID-19.

One reason for the increase in median sales price has been the low inventory, which also can help explain the 13 offers on one house. In February 2021, there were 214 homes for sale, compared to the 517 homes that were on the market a year ago.

It’s been a fast recovery considering a year ago, Hawaiʻi, like many states and countries, took drastic measures to slow the spread of the novel coronavirus that was quickly becoming a global health crisis. Non-essential businesses were shutdown. People were told to stay home if possible. A mandatory 14-day quarantine was implemented for most people flying into Hawaiʻi. Unemployment soared to over 30 percent, and many businesses were forced to close for good.

As a result, Chin said: “There were tons of cancellations of escrows. The world stopped. We went through strict quarantine and you couldnʻt come to Hawaiʻi. So a lot of them couldnʻt do final inspections or chose not to because they lost their jobs. … In April 2020, the world kind of crashed.”

During April 2020, pending sales on Maui plummeted to 324, according to data from the REALTOR Association of Maui.

Smith, who has been selling real estate for 32 years on Maui, said the sentiment among local agents at the time was: “Oh my gosh, what is going to happen? No more houses are going to sell. None of us knew. It sort of was a weird time.”

During this “weird” time of the early months of the pandemic, several real estate agents said some potential buyers waited for expected deals to materialize on Maui. But sales prices never dramatically dipped.

One reason no deals materialized is there has been a foreclosure moratorium on federally-backed single family mortgages through March 31, 2021, due to the pandemic. Real estate agents on Maui say they do not expect a flood of foreclosures to hit the market after the moratorium is over, partly because of the federal relief programs that have helped home owners.

After the real estate market came to a screeching halt a year ago, it took a few months, but last summer the recovery began slowly, fueled in part by people moving to Maui who could now work remotely due to the pandemic.

This group included several families from Silicon Valley in California, where cases of COVID-19 were surging. Parents who now were working remotely in the tech and social media industries were lured to Maui partly because their children could attend school in-person at private Maui schools.

Administrators at Maui Preparatory Academy, a private K-12 school in Napili, had expected enrollment to drop due to the virus that led to the school closing in-person learning in March through the end of the 2019-2020 school year. But when the academy reopened with in-person learning on Aug. 17, 2020, enrollment had skyrocketed.

“In a normal year, we are at 210 [students],” said Liz Turcik, the academy’s Director of Admissions and an AP History teacher. “But right now we’re at 270.”

The influx of students began with one family from Silicon Valley in California, said Fitch, the real estate broker who also is a founding member of the academy that opened in 2005.

In July, the family with 2 or 3 school-age children originally was looking for a place to vacation on Maui, since all of the major hotels were closed. But by the end of the conversation they were looking for a house to buy.

Turcik said California parents began calling in late July — just weeks before the new school year was scheduled to start — to ask about what the school had to offer.

“I did a virtual tour, walking around the campus with my cell phone because I didn’t have time to get a videographer,” Turcik said. “From that, word of mouth led to neighbors and friends of friends calling. It spread through a good chunk of people in the tech industry who wanted their kids to have in-person learning.”

“A lot of them already are enrolled for next year, too,” Turcik said. “A lot are staying. And a lot have bought houses.”

There has been an exodus of people leaving Maui due to the pandemic.

“I can personally think of two business people who not knowing what was going to happen, and unsure if we were ever truly going to fully open up to where we were in 2019, sold and moved to the mainland,” Smith said. “But they were in the lower price point, condo owners.”

Smith said it is “sad” that some people are leaving the island because they no longer can afford to live here.

“It is bittersweet,” she said of the booming real estate market. “I love to sell real estate but I’d also love to have my children be able to afford a house here, and that is probably not going to happen.”

On Oct. 15, Hawaiʻi launched its Safe Travels Program, which enabled people coming from the mainland to skip the state’s mandatory quarantine with a negative COVID-19 test. While the program has led to a slow rebound of the tourism industry, which now is only at levels about 35 to 40 percent of what they were before COVID-19 shutdowns, it helped propel the real estate industry to sales numbers and prices higher than before the pandemic struck.

“Now looking back, when there is chaos on the mainland, and life is in an upheaval, people want to be where they safe. And Maui is a bubble, and people feel safe here,” said real estate agent Smith, who recalled similar buying sprees occurred on Maui after the 9/11 attack and recession of the mid 2000s.

Chin, with Fidelity National Title & Escrow, said there has been a “huge shift” from condo sales dominating the market before the pandemic to home sales now occupying a much larger percentage of the total sales.

Before March 2020, condo sales average about 56 to 59 percent of the sales on Maui, with home sales at about 38 percent.

In January 2021, condo sales dropped to 48 percent of the sales and home sales increase to 43 percent.

“People now know with COVID that life is short, in my opinion, and they can work remotely,” she said. “People are moving here.”

Two other reasons that have contributed to strong sales have been a bull stock market that makes “people feel like they are wealthy and have cash” and historically low interest rates, Chin said.

And, Smith said, a lot of people buying in Maui now are wealthy. “They can pick up a $2 or $3 million home and it’s no big deal for them,” she said.

Fitch said she if seeing more entrepreneurs “who can work anywhere in the world” making the move to Maui during the pandemic.

“Generally speaking, during the pandemic, people have been having to be more at home, and not being able to be out and about as normal,” she said. “Home is becoming more and more important. … Where can you go and be in the United States, with endless summer year-round and the beauty and the multicultural aspect? To me, it really truly is a no-brainer.”

Why Your Real Estate Development Team Needs To Have Operational Insight