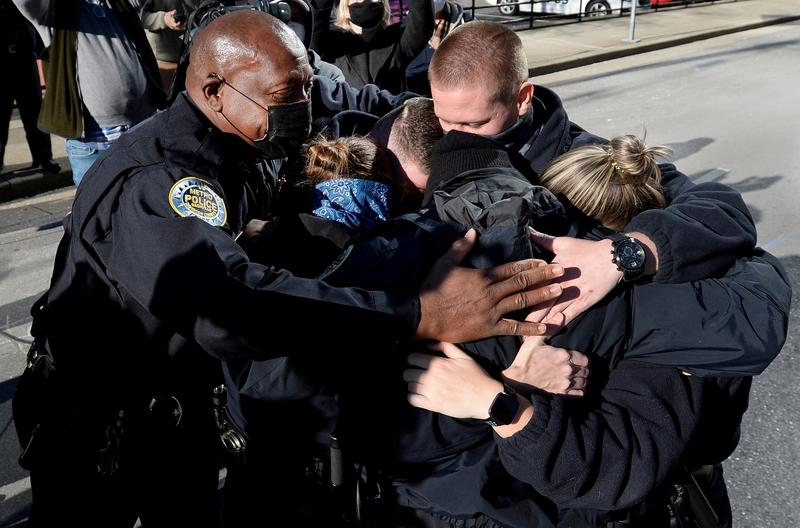 (Reuters) – The 63-year-old suspect in the bombing that rocked Nashville on Christmas morning was killed in the blast that destroyed his motor home and damaged more than 40 businesses, authorities said on Sunday.

FBI forensic experts matched DNA samples recovered from the scene to that of Anthony Q. Warner, whose home in nearby Antioch was searched on Saturday by federal agents.

Late on Sunday, the FBI tweeted bit.ly/3hkh7dg a photo of Warner.

“We’ve come to the conclusion that an individual named Anthony Warner is the bomber and he was present when the bomb went off and that he perished in the bombing,” Donald Cochran, U.S. Attorney for the Middle District of Tennessee, told a news conference.

Officials said it was too early in the investigation to discuss the suspect’s motives.

Warner’s motor home, parked on a downtown street of Tennessee’s largest city, exploded at dawn on Friday moments after police responding to reports of gunfire noticed it and heard music and an automated message emanating from the vehicle warning of a bomb.

The explosion in the heart of America’s country music capital injured three people and damaged businesses including an AT&T switching center, disrupting mobile, internet and TV services across central Tennessee and parts of four other states.

As investigators followed up on hundreds of tips from members of the public, they searched Warner’s home on Saturday and visited a Nashville real estate agency where he had worked on computers.

The owner of Fridrich & Clark Realty, Steve Fridrich, told the Tennessean newspaper that for four or five years Warner had come into the office roughly once a month to provide computer consulting services, until this month when Warner told the company in an email that he would no longer be working for them. He gave no reason, according to Fridrich.

“He seemed very personable to us – this is quite out of character I think,” Fridrich told the newspaper.

Nashville Mayor John Cooper said on CBS News’ “Face the Nation” program on Sunday that local officials felt there had to be some connection between the bombing and the AT&T Inc building.

Damage to the switching center was so extensive that AT&T teams had to drill access holes into the wreckage to connect generators to critical equipment, as well as pump three feet of water from the basement. The company said in a statement on Sunday that it made “significant progress” overnight and had restored power to four floors of the building.

AT&T said it was aiming to restore all its wireless service by the end of Sunday.

At a news conference on Sunday, five Nashville police officers who were on the scene early on Friday recalled the dramatic moments ahead of the explosion, as they scrambled to evacuate homes and buildings and called for a bomb squad, which was en route when the motor home blew up.

“I was thrown forward, knocked to the ground,” officer Brenna Hosey told reporters about the moment of the explosion. “But I was able to catch myself, I was fine.”

The officers have been hailed as heroes by city leaders.