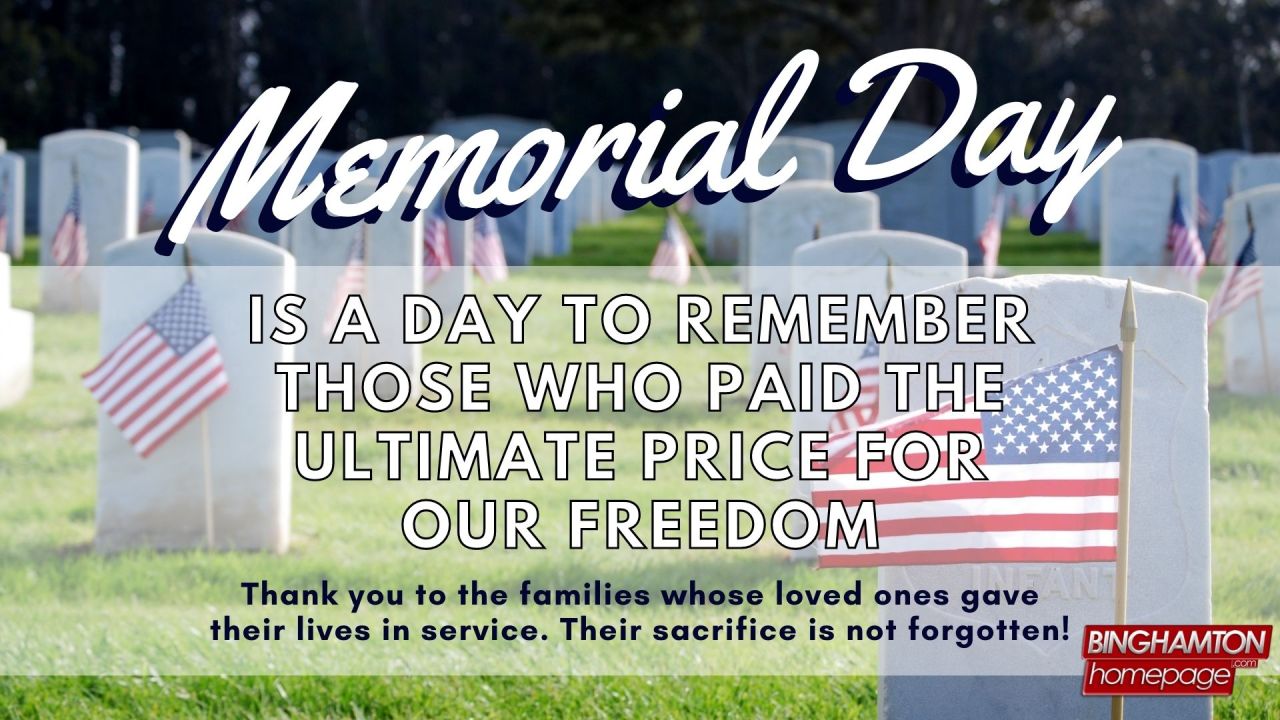 ELMIRA, NY (WETM) – The holiday known as Memorial Day in the United States is a holiday to honor the men and women who have died while serving in the U.S. military. Memorial Day is frequently confused with Veterans Day and July 4th as to who it is set to remember.

Memorial Day is a day of remembrance for the ones who are no longer with us, it is not a day to recognize veterans or current members of the military for their service. While every day we should be grateful to the men and women who have and continue to defend our freedoms. This year Memorial Day occurs on Monday, May 31st.

The holiday originally was called Decoration Day, following the Civil War, and eventually became a federal holiday in 1971. The establishment of the first national cemeteries was a result of the number of lives claimed in the Civil War.

By the late 1860s, Americans in various towns and cities had begun holding springtime tributes to these countless fallen soldiers, decorating their graves with flowers and reciting prayers.

It is unclear where exactly this tradition began; many different communities may have independently held memorial gatherings. According to History.com, some records show that one of the earliest Memorial Day commemorations was organized by a group of formerly enslaved people in Charleston, South Carolina less than a month after the Confederacy surrendered in 1865. The Department of Veteran Affairs also reveals other cities that claim to be the birthplace of Memorial Day, including Macon, Columbus, Georgia, Richmond, Virginia, and Boalsburg, PA. Nevertheless, in 1966 the federal government declared Waterloo, New York, the official birthplace of Memorial Day. Supporters of Waterloo’s claim say that earlier observances, were either informal, not community-wide, or one-time events.

Waterloo, which first celebrated the day on May 5, 1866, was chosen by Congress and President Lyndon B. Johnson in 1966 as the birthplace of Memorial Day because it hosted an annual, community-wide event, during which businesses closed and residents decorated the graves of soldiers with flowers and flags.

For decades, Memorial Day continued to be observed on May 30. But in 1968, Congress passed the Uniform Monday Holiday Act, which established Memorial Day as the last Monday in May to create a three-day weekend for federal employees. The change went into effect in 1971. The same law also declared Memorial Day a federal holiday.

During a non-pandemic year, cities and towns across the United States host Memorial Day parades each year, often incorporating military personnel and members of veterans’ organizations.

Americans also observe Memorial Day by visiting cemeteries and memorials. Some people wear a red poppy in remembrance of those fallen in war—a tradition that began with a World War I poem. On a less somber note, many people take weekend trips or throw parties and barbecues on the holiday, perhaps because Memorial Day weekend—the long weekend comprising the Saturday and Sunday before Memorial Day and Memorial Day itself—unofficially marks the beginning of summer.

Elmira and Millerton will both have Memorial Day parades to remember the sacrifice of the men and women who have sacrificed their lives for our freedom.