“There was a Christmas tree and a wreath,” she told The Courier Journal. There wasn’t much to view at the house, but back then, the windows of Stewart’s Dry Goods in downtown Louisville boasted the ultimate festive feast for the eyes. “Part of Christmas was going downtown and looking at (those) windows,” Hollinsworth recalled.

Years later, her love for holiday décor was reignited. One of her husband’s med school classmates invited her to a Christmas home show in St. Matthews, and she was blown away by what she saw.

“I walked into that house and every room was decorated,” she said. “I was like … I’m going to do this someday.”

Hollinsworth’s festive decorating started off small — with just one tree, as is usually the case. But every year, her collection of Christmas items grew. By the time she moved into her current home in 2007, she’d amassed quite an assortment. Thankfully, the new house offered ample space, giving her a chance to decorate her abode exactly as she saw fit.

“I (decided) to use red and green in certain rooms, but I (wanted) white, gold, and cream in my living room,” she explained. “I’d never had that.”

Today, her living room is anchored by a seven-foot tree on a large gold pedestal. The extra height from the base makes the decoration seem exceptionally large, even in a room with 12-foot ceilings.

“When we open presents on Christmas Eve and Christmas morning,” Hollinsworth said, “all of the bows go under the tree, and it still looks pretty.”

Ribbons, bows, reindeer figurines, a nutcracker, and a small Santa statue surround the white fireplace mantel. Electric candles, along with gold and white ornaments and baubles, sit inside the fireplace itself.

“I never use my fireplace,” Hollinsworth explained, “and I thought, what can I do to make it look pretty? And (now), I leave it year-round. I love it.”

Another of Hollinsworth’s perennial decorations sits in a corner in the kitchen. The green potted artificial plant, dubbed the vegetable tree, could easily be mistaken for a small Christmas tree. Its ornaments, however, are all garden themed. Everything from a sunflower and a tomato to a lemon wedge and pepper adorn the plant.

Though much of Hollinsworth’s décor was purchased from shops around town and some local artists, there are a few Santa figures that she crafts herself — to display at home and to give away. There are two in the house; Hollinsworth has also donated a few to charity auctions, and gifted numerous others to her daughters-in-law and grandchildren.

“My son builds the frames, and I wrap it with batting,” she said, explaining that she then creates Santa’s clothing by repurposing various pieces of fabric. The Santa currently on display in the entryway boasts a robe made with material from a fur coat that belonged to her husband’s grandmother.

You may likeLooking for holiday cheer? Historic Holiday Designer Show House is a yuletide ‘treasure’

Hollinsworth explains that aside from the decorations in the fireplace and the vegetable tree in the kitchen, nearly all the other Christmas pieces replace other décor that is displayed throughout the rest of the year.

“We move (all kinds of) stuff — (including) furniture — up and down,” she said, adding that she has roughly 850 square feet of storage downstairs. The room serves as both her crafting area as well as a carefully organized space for her holiday inventory. The room’s custom-built shelves, she explains, were created specifically to accommodate the numerous plastic totes she fills with all her Christmas pieces.

Getting everything set up year after year usually takes at least five full days. Hollinsworth starts the day after Thanksgiving, getting help from friend Debbie Wise as well as her grandchildren.

“Every Thanksgiving before (my grandchildren) leave,” Hollinsworth said, “they go downstairs, and they carry all the Christmas stuff upstairs. I have (everything) marked with which room they go in.”

After the initial setup, she spends a couple of weeks tweaking and rearranging until everything is just right.

Owner: Mary Jane Hollinsworth, who is retired. Also in the home is Patches, a 13-year-old Parson Russel terrier.

Home: This is a 4-bed, 3-bath, 4,200-square-foot condominium in the Valencia at Landis Lake subdivision in Louisville that was built in 2007.

Applause! Applause: The homeowner would like to thank her grandchildren as well as Debbie Wise for helping her decorate. 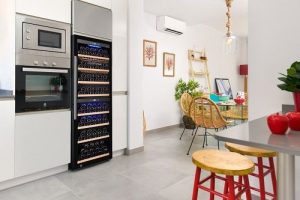