It’s rare that Martha Stewart says something we can’t instantly get behind. Truthfully, it’s easy to blindly follow her — the woman has penned almost 100 cookbooks and if that’s not enough, she’s spent decades offering expert advice on entertaining, cooking and decorating. And our obsession with her goes way beyond homemaking. Stewart is also our role model for dewy, glowing skin, too.

There is, however, one small thing many of us may not see eye to eye on with the cooking mogul.

On the November 8 episode of The Tonight Show Starring Jimmy Fallon, Stewart made a guest appearance to promote her new show on HGTV, Tables Wars — a tablescape decorating competition that she’ll be the lead judge of. She also got us excited about the new release of Martha.com, an online store with curated, designed and favorite items from Stewart herself. But it was her very convicted opinion on mugs that left us questioning everything.

After chatting about her latest ventures, host Jimmy Fallon suggested that he pitch some of his ideas to Stewart, with the hopes of one day going into business together. “I was thinking, because you always have these new ideas,” Fallon laughed. “I always thought maybe I’d pitch you an idea, and maybe we can get into business together.”

His last creative, quirky idea involved a coffee mug invention that would essentially stir itself. While she didn’t exactly agree with any of his inventions (we’re with you on that, Martha), the last one just didn’t sit well with her. Stewart was quick to clear up her strong feelings about coffee mugs in general.

“But see, I don’t like mugs,” Stewart told Fallon. “I think mugs are sort of clumsy and ugly.” She also shared that her distaste for mugs is the reason you won’t be able to find any if you’re ever a guest in Stewart’s home. “I don’t own a mug in my house,” she revealed.

Cleary, Stewart doesn’t play around when it comes to her stance on this. And if she’s drinking a hot beverage, she’ll opt for other prettier types of drinkware. “No,” Stewart continued. “I have beautiful cups.”

Fallon was a good sport, and innocently asked what she did with all the free mugs she’s been gifted after appearing on his talk show over the years. “[I know, but] I give them away,” Martha laughed. 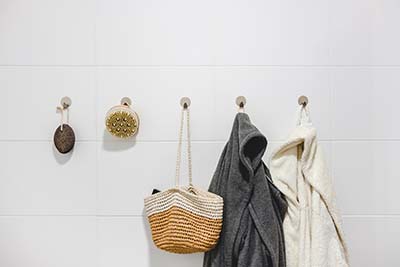 Next post Why do you need robe hooks in your bathroom