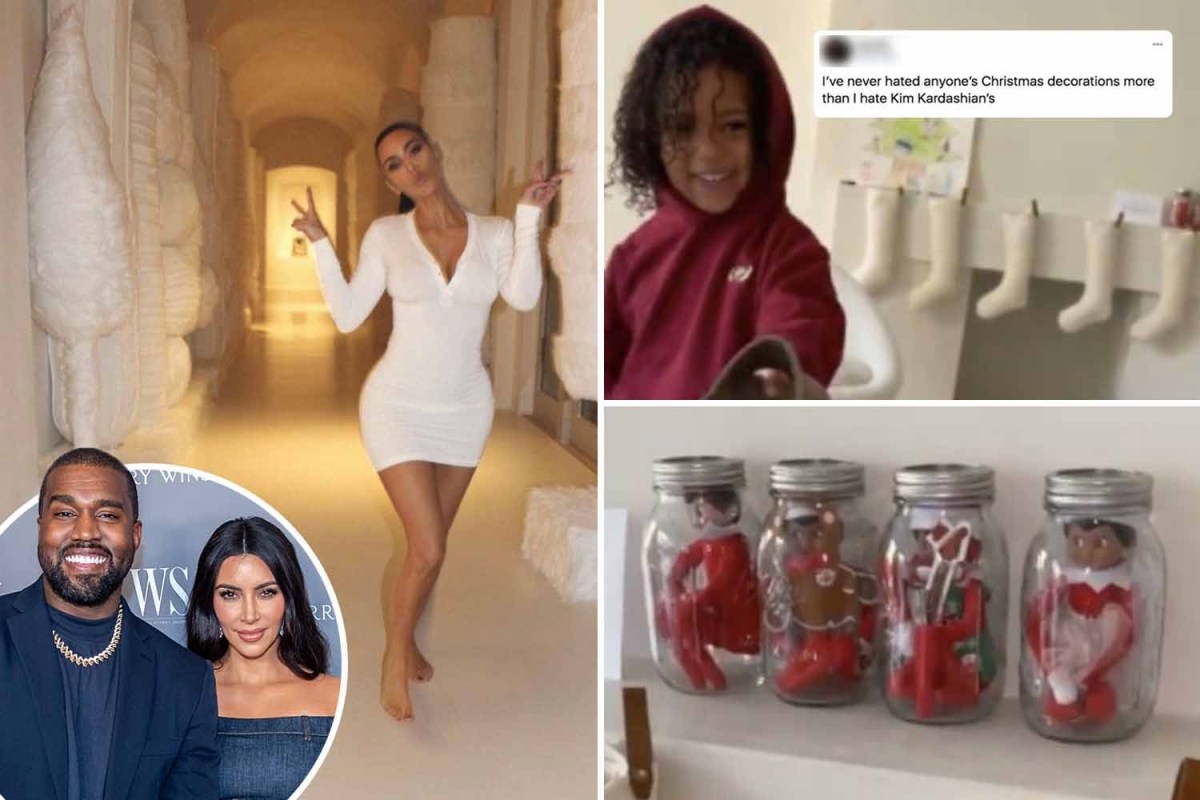 KIM Kardashian was slammed by fans for the “ugly” monotone Christmas decorations she put up for the holiday season in her “morgue-like” Los Angeles mansion.

The KUWTK star shared a glimpse into her all-beige private quarters in a Sunday morning video that included sons Psalm and Saint as well as her niece, Dream Kardashian.

💖 Read our Kardashian live blog for the latest news, gossip and updates from the family…

Since she and husband Kanye West, 43, are currently “living separate lives,” the mom-of-four is left to watch their children while he reportedly remains in Wyoming.

Kim, 40, posted a video of the piano player, Philip Cornish – who’s been showing off his talent everyday to play holiday and Disney songs that wake up the household of kids.

As her little ones came running from their bedrooms, the SKIMS founder showed off the decoration scheme in her home this year.

White stockings for each of the family members hang with a wood clip on the family’s white fireplace.

The whole family: Kanye, Kim, North, Saint, Chicago and Psalm are stitched on each stocking with white thread.

On top of the fireplace is the Elf On The Shelf for their two sons and two daughters – except each figurine is inside of a mason jar for proper “quarantine.”

The living room – which includes all white or beige furniture – also had all white modern holiday trees.

Surrounding the entire common area, each tree formed a different shape, with some being a straight pillar and others being a series of balls stacked on top of each other.

The family’s Christmas tree had artificial snow drooping throughout as warm lights made the branches sparkle.

Kim was then joined by her son 18-month-old son, Psalm, who popped up front and center in the camera lens.

His older brother, Saint, 5, came out to join the fun playing around with his brother in the all-cream room.

Rob Kardashian’s daughter, Dream, 4, also made an appearance as it seemed she had a sleepover with her aunt and cousins.

While one fired off: “Imagine having kim k money and a house that ugly. what’s the point.”

“Your house looks so cold n not lived in. Where’s a plant or pictures? That big house n it looks like a morgue, no life,” a fourth wrote.

Another person pointed out the extravagance of having a live pianist to wake up to everyday: “Kim Kardashian has a pianist playing Christmas music in her house to wake them up.. I don’t want my life anymore.”

Kim was on both mom and auntie duty solo as the Yeezy mogul remains in Wyoming “living separate lives.”

However, after spending months apart in different states, the family will be coming together to enjoy Christmas together.

A source told E! News: “They will be spending Christmas Eve with the family having a low-key get-together.

“It won’t be like years past, but they will do something as a family and all be together.”

The insider added that some of the Kardashian-Jenners will be “heading to the desert for part of the break to get some sun and relaxation.”