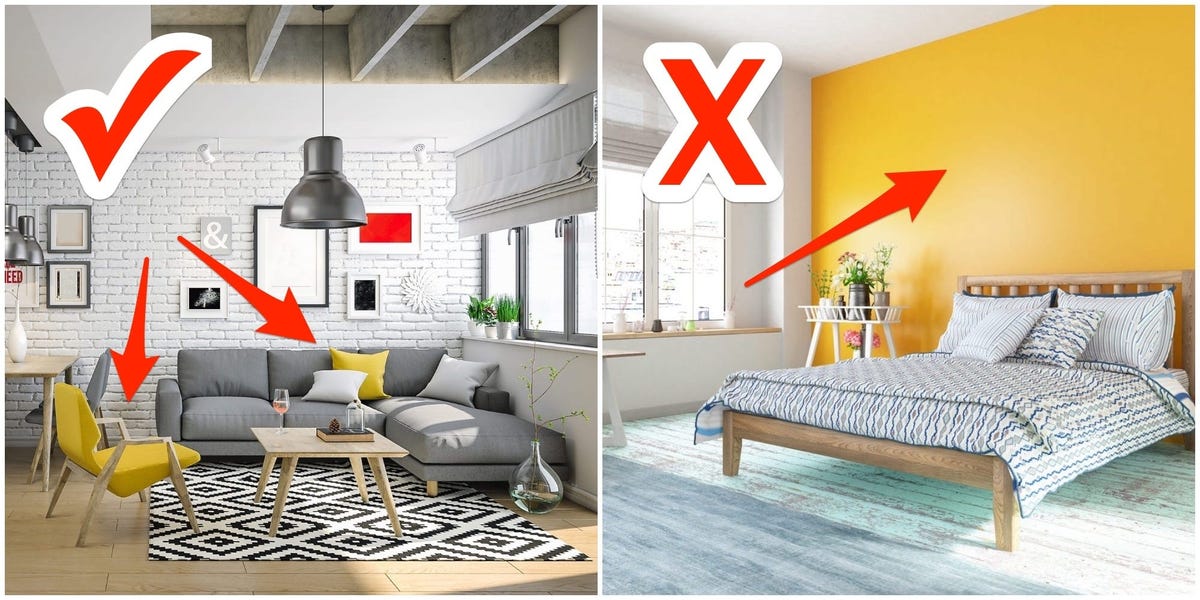 Pantone’s annual Color of the Year does more than simply define the next 12 months with a timely hue or shade.

From high fashion to iPhones, each year’s selection influences industries and inspires people to incorporate the color in a number of fascinating ways – like on social media or in their homes.

Earlier this month, the design world perked up when Pantone announced Ultimate Gray and the vibrant, yellow Illuminating as its Color of the Year 2021 selections.

According to the color company, “the union of an enduring Ultimate Gray with the vibrant yellow Illuminating expresses a message of positivity supported by fortitude” after a tumultuous 2020.

Insider spoke with five interior designers to discover how to best use the new Pantone Color of the Year to make your home picture-perfect for social media.

Like social media, interior design trends can change quickly, and Jared Epps, owner and CEO of JSE Design in New York City, told Insider that too much of either color can be overwhelming.

“To be honest, as a designer, I think any color that is as rich in tone as these colors would be too much to do the whole room,” Epps said.

“They would be great accent colors. [The gray] would give you a very sophisticated calming pallet. As far as the yellow, I feel like that would be used in sparse elements,” he added.

Both Epps and Kyla Herbes, founder of House of Hipsters, suggested easy fixes like throw pillows, blankets, and other pops of color to be dynamic.

“Those colors are too bold,” Herbes told Insider. “I think if you’re doing it yourself, through evolution you can slowly add those things in and not just go ‘I’m all in.’ Make sure it feels layered with different textures and materials.”

According to Maggie Griffin, founder and lead designer at Maggie Griffin Design, digital mavens can use pottery and other table toppers to incorporate Ultimate Gray.

“When it comes to the Ultimate Gray, there’s a very traditional old practice of making ironstone, which is an old type of pottery,” she said. “You can find really interesting antique pieces made out of it if you wanted to start a small collection.”

Ultimate Gray could also be used for a textured wall to add an extra, super visual addition to a room

“It’s a nice balance to say, a Belgian linen chair or a velvet sofa,” Griffin said, referring to a playful mix of materials.

Griffin added the Ultimate Gray is a “great neutral and it has its place for sure, but sometimes it can read a bit melancholy.”

“So you have to be careful about pairing it with more textural things like wov ens, wicker, rattan, and bamboo. It’s a way to keep it a little bit more balanced with that warmth,” she said.

“For yellow in a kitchen, I could see it being more of an accent piece in the way of serving pieces or maybe it’s a great yellow jar that you put fresh greenery in,” said Griffin.

“My advice is to always find things that you can clip from your yard. It’s sprigs of holly right now, and then in the springtime you’ve got peonies and daisies. Clipping things that are more seasonal keeps it feeling very current,” she said.

While Ultimate Gray can be perceived as gloomy, Illuminating’s bright yellow is built for social media, one designer says

“I would probably not recommend painting the entire room that yellow color, but in a social media post, if there is a post of that bright yellow color in a room, it could have a different impact,’ Epps told Insider.

“That yellow could get a lot of attention because people are scrolling through and it’s just an illuminating color. So, that could work to their advantage,” he said.

Whether an LED ring light or Lume Cube, lighting has become an important feature for social media and can make or break a post.

“I would not paint a bedroom yellow or even have a yellow feature wall,” said Epps.

“Whatever paint color you put on the wall, light bounces off it and it changes people’s skin colors. So if you have a room that is all yellow, when the lights are reflecting off it, it can make people look more like kind of yellow or green in the face.”

Designers say a living space needs to be three things to appeal to audiences on social media: layered, clean and finished

“For a room to look good on social media, it needs to be clean and clutter-free, bright and sunny (or edited with extra brightness), and updated — no outdated finishes,” Ashley Moore, of Moore House Interiors, said.

“Finding throw pillows and blankets, styling accessories, kitchen pots and even flowers/greenery in Ultimate Gray and Illuminating would be a great way to incorporate both colors in natural, soft ways without either being overwhelming,” said Moore.

Santiago agreed, adding that “contrasting colors is a great way to create conversation and add dimension within the space.”

“It is definitely pushed on social platforms because they know it’s trending,” Herbes said.

While speaking about Illuminating, Herbes added that a splash of the energetic yellow could catapult posts to the top.

“If you have that color on a wall, [the algorithms] will recognize that it’s yellow and that it’s home decor. It will push it out to people that are scrolling and pausing more often for home decor,’ Herbes said.

“If you’re someone who is looking to up your social media game, hop on that trend and show it because the algorithm will definitely be in your favor there,” she added.

Home design ideas: Creating a serene backdrop for a bedroom

Should you invest in stocks or real estate?