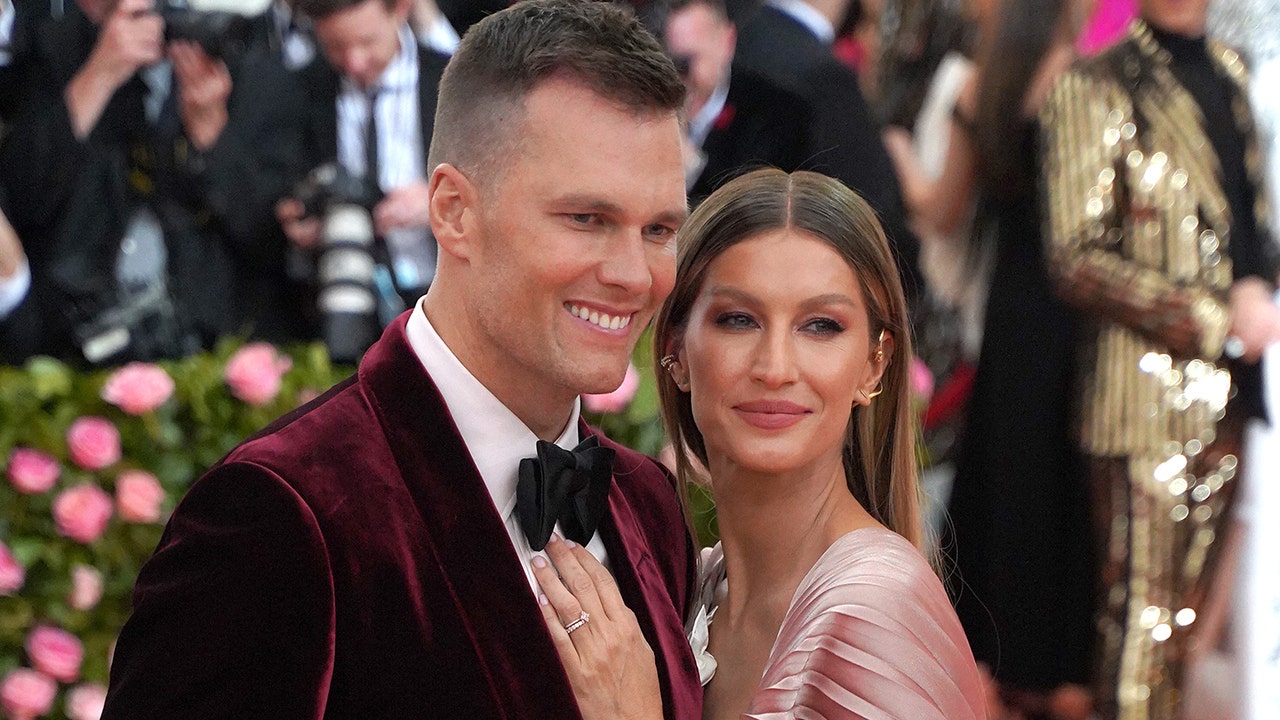 Tom Brady is a football legend — but he’s also kind of a real estate mogul.

The 43-year-old Tampa Bay Buccaneers quarterback has a $26 million portfolio of homes from New York to Florida and even Montana. He has also sold more than $140 million worth of properties, making about a $30 million profit off real estate deals alone.

Brady shares these homes with his wife, 40-year-old Brazilian supermodel Gisele Bündchen, with whom he has two children, Benjamin, 11, and Vivian, 8. He also has a 13-year-old son, John Edward Thomas Moynahan, with his ex, actress and model Bridget Moynahan, 49.

The legendary quarterback with six Super Bowl rings will lead his new team, the Tampa Bay Buccaneers to Super Bowl 2021 on February 7, but win or lose, he can always go home to his pricey mansions in Miami, New York City and Montana.

Tom Brady and Gisele Bundchen are pictured in 2019. The couple has a $26 million portfolio of homes in New York, Florida, Montana and Costa Rica. (Photo by Sean Zanni/Patrick McMullan via Getty Images)

Scroll through to peek inside the superstar couple’s expansive homes.

Now that he’s repping red and black for the Buccaneers, Brady has put down roots in sunny Florida. He and Bündchen’s most recent purchase is a $17 million home on Indian Creek Island in Miami — a steal in the area that has become known as “Billionaire’s Bunker.”

The couple will knock down a 5,172-square-foot, five-bedroom, five-bathroom abode on a two-acre lot and custom-build a new one, Page Six reported.

Sources say the construction will emulate their one-time LA home, which they custom-built with a budget of $20 million.

Bündchen is also an ambassador for the United Nations Environment Programme — and her passion for conservation is reflected in their homes’ designs. The couple is expected to use environmentally friendly materials and solar panels in the design, as they have in their other custom-built properties, according to Architectural Digest.

On one side of the lot is the crystal blue Biscayne Bay; on the other side is an expansive golf course. Brady was already seen sailing into the property on a 40-foot yacht in December. The lot on the Southwest corner of the island is next door to his pal, Jeffrey Soffer. Other neighbors include Jared Kushner and Ivanka Trump.

“I was a native Californian for a long time in my life and went away from it for about 25 years. You won’t catch me dead living in the Northeast anymore . . . I’m loving the warm weather, and it’s been a great feeling,” Brady told reporters in December.

Before buying his Miami house, he rented Derek Jeter’s house in Davis Islands, Tampa, which is only 20 minutes from the Buccaneers’ Raymond James Stadium. Brady didn’t seem to mind the $75,000 a month price tag, but the waterside mansion wasn’t private enough for the superstar couple.

“I forgot people could drive up to your house . . . In the backyard there’s a lot of boats that have pulled up and people at the front,” he complained to Howard Stern last year.

It was falsely rumored in October that they would move to Clearwater, Florida, after moving out of Jeter’s house, the New York Post debunked last year.

The new, smaller condo was only $3.6 million compared to the $36.8 million their larger condo went for. Both condos are on the 12th floor, in part, because 12 is Brady’s “lucky number” from his days with the Patriots, the New York Post’s Jennifer Gould previously reported.

Their new condo has four bedrooms and 4,331 square feet overlooking the Hudson River. The private terrace is over 1,000 square feet and includes an outdoor kitchen.

The unit has high ceilings, a private elevator, a foyer, a gallery, a great room with a fireplace, a dining room and a family room. There is an eat-in kitchen with oak paneling, marble counters, two dishwashers and wine storage. The master bedroom has river views and two walk-in closets, according to the listing.

The Yellowstone Club is a super-exclusive development in Montana where the rich and famous, such as Bill Gates, Justin Timberlake and former Google CEO Eric Schmidt, pay top dollar for privacy and powdery slopes, according to the Daily Mail.

Details about his Montana home are scarce, but we can assume Brady spent at least several million on the purchase — condos start at $5.7 million, and homes can go for up to $30 million, according to the Yellowstone Club site.

Brady has enjoyed Yellowstone’s golf clubhouse and 28,000-square-foot golf course, but the development offers much more — ski lifts, 2,900 acres of ski slopes, access to the Big Sky Resort with 5,800 acres of ski slopes, a pool, a fitness center, yoga classes and access to personal trainers. Plus, residents get complimentary breakfast and can dine in the lodge or the “dining yurt.”

Little is known about the couple’s remote home on the Nicoya Peninsula in Costa Rica, but the family often vacations there — even during the pandemic!

The couple is also said to have had a second wedding ceremony in Santa Teresa, and Mel Gibson also has a home there, according to Forbes.

Houses in the area start at less than $200,000 but can range up to $20 million, listing sites show. There are plenty of vacation rental homes in the area, although reports say Brady does own a house in Santa Teresa.

The QB made $30 million flipping $140 million worth of houses

The quarterback has sold more than $140 million worth of houses in his lifetime. With large renovation budgets and a classic, understated style, he has added over $30 million to his net worth in the process.

Brady‘s custom-built mansion outside Boston was for sale until Christmas Eve, when it sold for a rumored $32.5 million, according to the Boston Globe.

Brady and Bündchen purchased the Brookline estate for $4.5 million in 2013, according to the Boston Business Journal.

The couple spent an unknown amount on the custom build, but their other custom-built house in Los Angeles, which used the same architect and interior designer, had a budget of $20 million.

The 9,716-square-foot house has five bedrooms, a foyer, a living and dining room, a home office with a fireplace, an eat-in chef’s kitchen and a family room. The five-acre estate offers a 20-car circular stone driveway, an organic herb and vegetable garden, a pool, a patio and a 2,400-square-foot guest house with a yoga studio, according to Architectural Digest.

Brady originally asked almost $40 million for the Massachusetts estate when he listed it in August after leaving the Boston Patriots for the Tampa Bay Buccaneers.

“I knew it was just our time, our time was coming to an end” in Boston, Brady told Howard Stern in an interview in April.

The couple sold this three-bedroom, three-and-a-half bathroom condominium in 2018 for almost $13.9 million, according to property records, after first listing it for $17.3 million in 2016. They purchased the 48th-floor pied-à-terre in 2014 for $11.7 million, The New York Post previously reported.

The 3,310-square-foot home has two private elevators that open into an art gallery. Inside, the condo has an open living and dining room, a kitchen with a large wine cooler and a media room. The master bedroom has a walk-in closet and a private bathroom, floor plans show.

The 60-story tower overlooks Madison Square Park. Built in 2009, the building’s luxury amenities include a marble indoor pool, a steam room, a gym, a lounge, a parlor and a screening room with butler service, according to StreetEasy.

Less than a decade after they bought and custom-built their first property together — for $31.75 million — Brady and Bündchen sold their honeymoon home for $40 million in 2014.

The five-bedroom, nine-bathroom limestone house is surrounded by an actual moat filled with koi fish.

The home has a winding driveway, a pond, a driveway of reclaimed cobblestones, a pool, an oak-plank deck and a slate gray roof. The property also has a terraced garden with plums, guava, carrots and other produce, plus a chicken coop with hens that lay fresh eggs, according to Architectural Digest.

The couple employed their frequent collaborators, architect Richard Landry and interior designer Joan Behnke, to design the home after they purchased the property in 2008‚ with a $20 million construction budget, according to the Hollywood Reporter.

“Gisele and I have eight sisters between us, and there are lots of kids. We built this house as a sanctuary for our family — a place where we can enjoy being together,” Brady told Architectural Digest in 2017. Brady said they wanted a “comfortable house, not a style statement.”

They sold the 18,000-square-foot palace to Dr. Dre, an American rapper known for his popular “Beats by Dre” headphones, according to the Los Angeles Times.

Everybody loses sometimes — even Tom Brady.

In his first real estate deal ever, the rookie investor might have actually lost a few dollars. He reportedly spent $17.9 million purchasing and renovating a Boston property, only to sell the individual condo units for a combined $17.2 million in the next five years — for a small net loss of $700,000.

He purchased the building in 2006 for $6.24 million and spent $11.5 million converting it from nine condos into four, according to the Boston Globe archives. He also expanded the garage — which was originally a three-stall stable — and replaced the penthouse with a slightly smaller one. The previous owner had installed one as an addition, but it wasn’t compliant with town permits, according to a history of the property.

He sold the three non-penthouse apartments for $7.95 million, according to the Globe, and sold the penthouse for $9.3 million in 2011 — almost a million less than his original $10.9 million asking price in 2009 — the year he married Bündchen.

The limestone and granite house was originally built in 1903 for sugar manufacturer Joshua Bailey Richmond, designed by architects Peabody and Stearns and built by the McNeil Brothers builders. It had six fireplaces, a limestone gate, a butler’s pantry, a parlor, a library, a sewing room and a billiard room. The basement had a servants’ kitchen, dining room, laundry room, wine closet, wood room and livery room, according to floor plans. It was converted into nine apartments in 1944 by liquor dealer Fred Arata.

The Gilded Age-designed condo had three fireplaces, a foyer, a dining room, a library, a living room, a family room, a kitchen, a bar and a suite for each bedroom, according to floor plans.

Units in the building have unspeakably opulent crown moldings, chandeliers and carved mahogany paneling, according to a report by Realtor.com.

The Burrage House is a historic castle-like residence built in 1899 for businessman and lawyer Alfred Burrage. It has since been converted into four condominiums, according to the report by Realtor.com.

If you’re keeping score, don’t forget that the superstar couple also made a killing when they sold their north-facing 6,539-square-foot condo in Manhattan, which brought in $36.8 million, netting an $11.3 million profit from their initial investment in the property.

The 14-floor Robert A.M. Stern-designed building has 46 units. Amenities include an 82-foot lap pool, hot and cold plunge pools, a steam room, a sauna, a fitness center — all perfect for an athlete — plus a private courtyard, a squash court, a library and a billiards room.

“Tom and Gisele still love New York, but they are downsizing because they are spending so much time in Tampa,” an inside source told the Post’s Jennifer Gould in December. 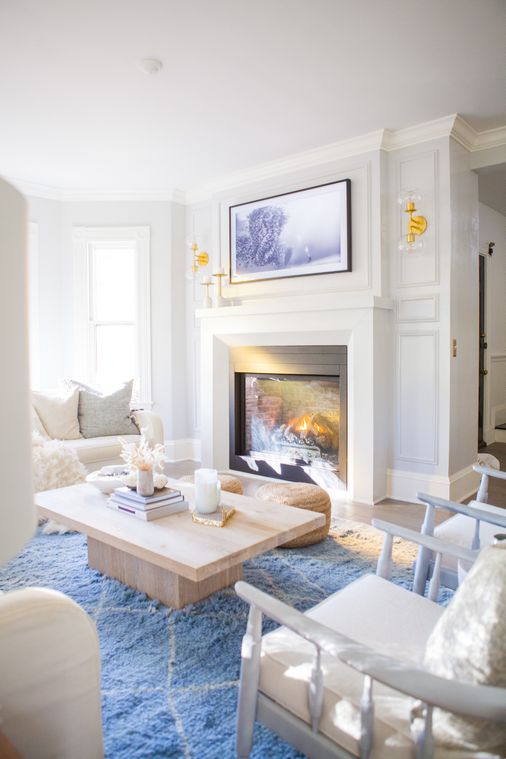 Next post Gain more counter space and other tips