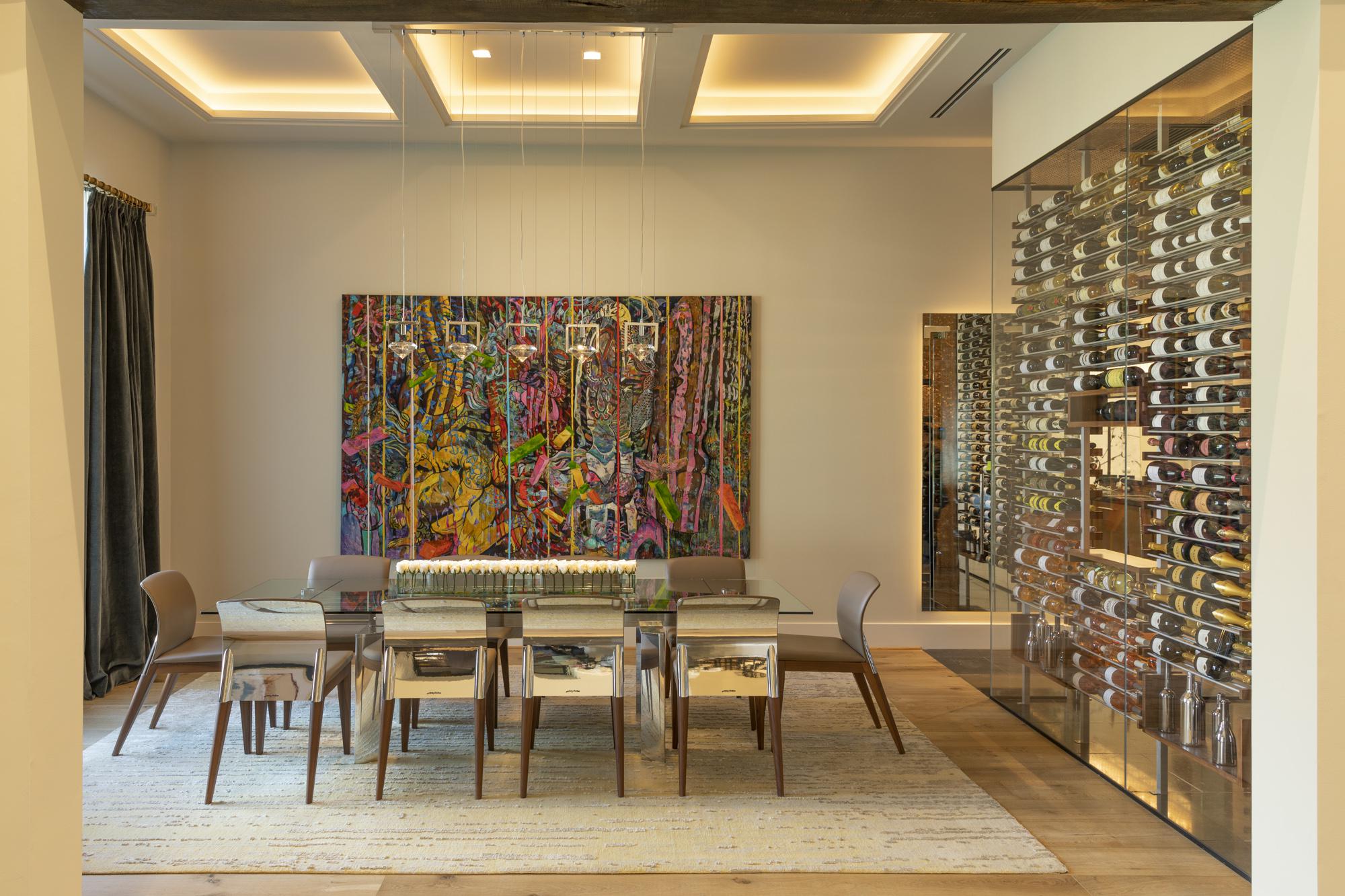 April and Victor Palafox met, got engaged and married in the course of a year and a half, and merging their households was a true “Brady Bunch” experience.

She has a son and a daughter while he has two sets of twins, a pair of boys and a pair of girls. Both were divorced, so sometimes the kids were with April and Victor and sometimes they were with their other parents.

Depending on the day or the time of year, the Palafoxes could have their house all to themselves or have up to six kids — now all teenagers — there at the same time.

That meant the family of eight would need a big house with plenty of spaces to be together or to be apart. Initially they purchased a spec home that was under construction and made it work.

A few years later they hired that same builder — Bruce Winfrey of Winfrey Design Build, along with interior designer Rainey Richardson of Rainey Richardson Interiors and the RR Home showroom in the Houston Design Center — to create an 8,300-square-foot modern chateau to suit their family’s growing needs.

Now married five years, the couple, both 47, and their kids moved into their new home in Tanglewood less than a month before the COVID-19 shutdown.

They didn’t think they needed a seven-bedroom house; the twin daughters wanted to share a room, and the three boys liked the idea of a suite they’d all share. Someday all of these kids will be driving, so the family needed a motor court instead of a simple driveway and garage.

The wing for the boys — 17-year-old Ricardo Zubizarreta and 19-year-old twins Alonso and Emilio Palafox — is loaded with personality. There’s a huge bedroom with three queen-size beds, plus their own game room with a comfy couch, large TV and a Smeg refrigerator for snacks. Decked out in red, white and blue, even the Smeg has a lively Union Jack flag emblazoned on it.

Alexia Zubizarreta, 18, has her own bedroom, with Italian wallpaper and a big daybed, and Victor’s twin daughters, 15-year-olds Constanza and Victoria Palafox, share a large bedroom with a Parisian theme in gray and white with pink accents.

A casual family room upstairs has a big TV for all the kids to watch together, plus there’s a movie room for even bigger gatherings.

Their outdoor space is meant for togetherness, too. There’s a patio, swimming pool, hot tub and a large fire pit with two oversized semi-circle benches covered with soft cushions. When the weather turns, they pile those cushions inside the casita that for now serves as a guest house.

Unusual tile was installed on the rear facade in a way that challenged Winfrey’s team to learn some new skills. In one place, a few tiles protrude to a peak and lights painstakingly embedded underneath glow through. On another side, the corners of tile peel back slightly to show the glow of lights installed in exactly the right spot there.

Similarly, the Palafoxes spared no detail inside.

A dramatic chandelier with 84 LED lights embedded in cigar-shaped crystal dangle at varying lengths on copper cable from the second-floor ceiling down the side of a stairwell.

The dining room, with a triple-coffered ceiling with cove lighting, backs up to an elaborate wine room and bar, with the main living area on the other side.

A number of rooms were designed around Victor’s favorite pieces of art. A huge abstract piece by New Zealand artist Jimmy James Kouratoras resides on a wall in the dining room, dictating that the chandelier over the table had to be slender enough or sheer enough not to disrupt the view of the painting. Contemporary metal-backed Roche Bobois chairs gather around a table — metal base with a glass top — that has leaves that automatically spread out.

The temperature-controlled wine room is glass on three sides with its one wall and ceiling covered in copper tile and Belgian Bluestone, a dark blue-gray limestone, on the floor.

While Richardson guided selections and handled space planning, the Palafoxes were very involved in décor, inspired by things they saw in their travels, from outdoor showers they saw at beach resorts to furniture in Europe or lighting they spotted in New York.

They kept track of all of it with lots of online searching, copious notes and a spreadsheet.

“In this design aesthetic, less is more,” Richardson said of the contemporary and modern furniture choices throughout.

There’s a bar on the other side of the wine room, so it’s accessible to both the dining room and living room. Its unusual counters are blue tiger-eye stone that’s cut and stacked into almost a mosaic pattern.

The living room is filled with Giorgetti furniture, including an oversized couch and a pair of stylish highback chairs, all in shades of gray with orange pillows and accents. The family’s dog, Lola, has her preferred spot on the couch and acts as if the home is hers to run.

April and Victor each have a home office, and though Victor used to go to his office at Morgan Stanley daily — a native of Mexico City, he’s an international investment banker — he’s been getting everything done from home since March.

His office was designed around Vik Muniz’s Beethoven portrait, at the center of built-in cabinets and shelves.

Painted a deep, dark blue-gray, the room features a modern desk, a pair of armchairs and a leather lounge chair perched on a zebra-skin rug.

Before getting married, April was an insurance lawyer, but now her days are spent tending to the needs of her husband, their kids and this big house.

Her office is a sweet space decorated with Michael Moebius art: one piece with Audrey Hepburn peeking through window blinds and the other of Marilyn Monroe in a black turtleneck.

The couple’s primary bedroom suite is an oasis, a vast space with a small living room, bedroom and an oversized bathroom that leads to their own Zen garden and an outdoor shower (there’s another one by the casita). Space is fully defined with his-and-hers toilets as well as his-and-hers closets.

The suite’s sleeping area and seating area are separated by a partial wall with a fireplace, and the bedroom has more Giorgetti furniture, a sleek channel-tufted Hypnos bed and a pair of cozy leather Hug chairs.

Though the bar, kitchen, pantry and other bathroom counters are all beautiful natural stone — quartzite or marble — the Palafoxes opted for slabs of porcelain tile that looks like dramatic gray-and-white marble. It lines the walls of the bathroom up to their coffered barrel ceiling.

Their unusual sinks are integrated into the counter slab so that it looks like an oval disc of the slab sits on the bottom of the sink, above the drains, another detail that will likely start showing up more in high-end contemporary and modern homes. Similarly, the bathroom mirrors have integrated LED lights.

April loves her kitchen, which actually has three parts: the main kitchen, visible from the living room, a side prep kitchen with extra appliances and pantry space and then another pantry where they keep all kinds of extra goods.

She’s a happy cook and doesn’t mind making food to suit different tastes in the family. 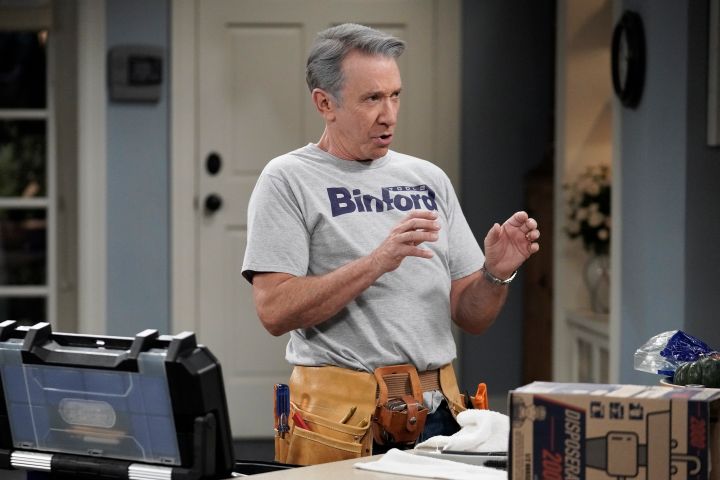