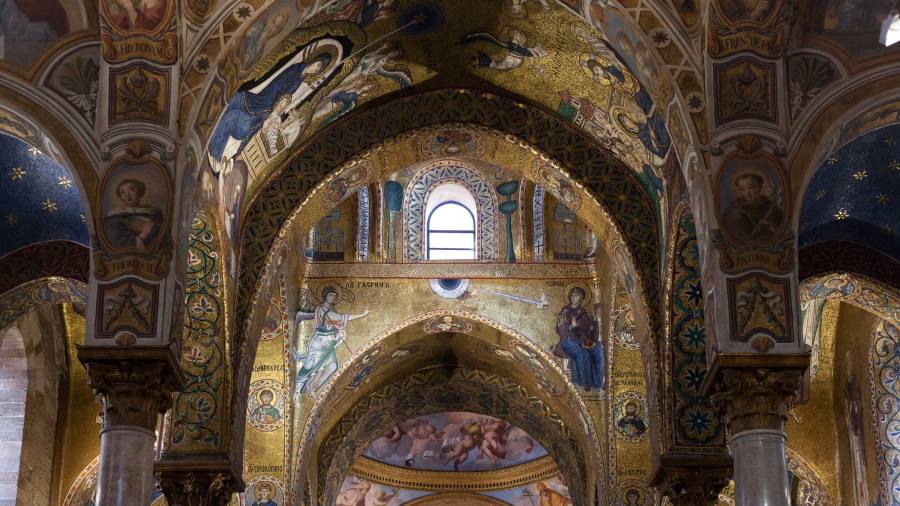 I first visited Palermo on a press trip with Dolce & Gabbana, who invited me to see one of their extraordinary Alta Moda shows. Domenico Dolce was born and raised in the Sicilian capital, and for the first time the endeavour showcased the high romance of his creative output around the landmarks of his youth. I arrived with strong preconceptions, but it didn’t take many minutes to realise that I had the place all wrong. Frequently overlooked by tourists – especially UK ones, who bypass it in pursuit of beach-y pleasures – Palermo’s treasures are often obscured by dowdy new constructions, with its real gems mostly hidden beyond closed doors: the jaw-dropping Valguarnera Gangi Palace, for example, an ancient residence that served as the location for Luchino Visconti’s 1963 film The Leopard, and an architectural homage to the art of high baroque. Or the Oratory of the Rosary in Santa Cita, sitting inconspicuously by a car park, but whose walls explode with putti, cupids and Virtue stuccos by the 17th-century sculptor Giacomo Serpotta once you get inside.

In “Palermo grande: a stunning hotel restoration unveils Sicily’s hidden gem”, Maria Shollenbarger has found new cause to visit Palermo, with the reopening of the storied Villa Igiea, one of the island’s few luxury hotels. Once a destination for Grand Tourists, artists and various aristocracy, more recently the hotel found itself in an interminable cycle of decline. Maria visits as its new owners complete a €30m renovation – and is suitably awestruck. Along with another recent hotel opening, the city is getting ready to reclaim its birthright as the Sicilian destination ne plus ultra once again.

Would you go anywhere if you were lucky enough to live in the country home of Cordelia de Castellane? For our cover story, the artistic director of Dior Maison and children’s collections invites us to her house in L’Oise, an hour north of Paris, and in doing so offers us a masterclass in perfect hostess summer style. “For me, there are no rules,” she tells writer Alexander Lobrano of her method, which combines heirloom objets, her Dior collections and pieces she’s picked up in Ikea. “I’m very traditional but I’m also spontaneous… What I like most of all is to twist things to remake them in a new way.” Cordelia’s insouciant attitude to interior decoration is certainly one for the Pinterest moodboard: I’m especially taken with her kitchen dresser crammed with crockery, or the pale-green milk-glass vases filled with peonies and placed in her Italian secretaire (“‘There are no rules’: inside the French country home of Dior’s Cordelia de Castellane”).

Designing a garden to combat climate change sounds rather less exciting than aspirational. But, as modern gardeners are discovering, the new focus on biodiversity, sequestering carbon and conserving one’s resources can result in gorgeous, thriving plots. As more environmentally friendly practices absorb the gardening agenda, Clare Coulson talks to the designers leading the field with new ideas. All are successors of Beth Chatto, the gardener who first pioneered environmental horticulture with her book The Dry Garden way back in 1978. Never has her mantra seemed so prescient as now.

And lastly, could a little bit of stress be good for us (“The Good Stress Guide”)? Some doctors think a soupçon of nervous energy is just the thing we need. Sadly, they don’t offer a prescription for drinking more espresso, my go-to solution for spiking flagging spirits. They suggest taking freezing showers or mountain climbing to find our edge… See you on the ice?

For the best of How To Spend It straight into your inbox, sign up to our newsletter at ft.com/newsletters