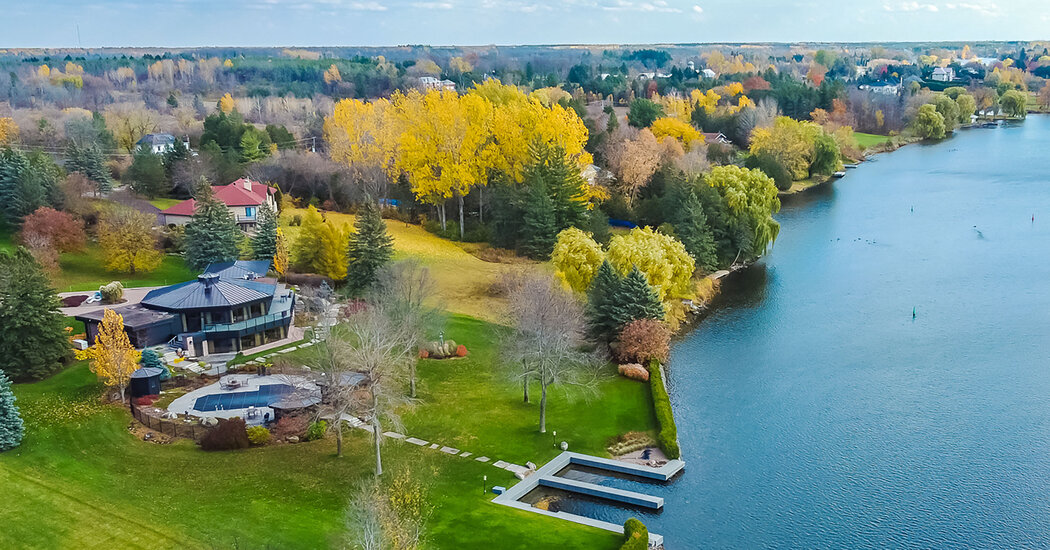 A Modern Four-Bedroom Home on the Riverbank

Set on the banks of the Rideau River, this custom-built four-bedroom home is in Manotick, a village about 15 miles south of Ottawa, Canada’s capital city. The 3.4-acre property includes 264 feet of water frontage, with two boat slips. “It’s rare to acquire a property on the river with this much waterfront,” said Marilyn Wilson of Dream Properties, the listing broker. “And having two boat slips is unusual. You wouldn’t be able to get them now because of conservation rules.”

Built in 1985 for the family of a local construction executive, the 6,105-square-foot house is anchored by a soaring, octagonal great room whose domed 20-foot ceiling, in honey-toned British Columbia fir, tapers into a skylight. “The stacked, repeated design of the ceiling evokes Art Deco, but the materials make it very warm for a contemporary home,” Ms. Wilson said. A granite column in the center of the room incorporates two gas fireplaces, built at right angles to each other.

Walls of windows offer river views from three sides of the great room, which is large enough to encompass the living and dining rooms. “Sightlines are spectacular,” Ms. Wilson said, including “incredible sunset views” from the west-facing windows.

The adjacent kitchen is centered around a granite-topped, V-shaped island with a raised glass counter. A gas fireplace clad in matching granite faces the island. High-sheen planks of jatoba, or Brazilian cherry wood, cover the kitchen floor, and sliding glass doors open onto a wraparound deck, which offers an unobstructed Rideau riverscape.

Down a short flight of stairs, the opposite side of the house has three bedrooms. Solid oak double doors open to the main suite, whose angled ceiling replicates the wood-beamed design in the great room.

The main suite connects to the home’s deck through its own patio door. Two other bedrooms share a bathroom, which has a decorative stained-glass window that echoes a similar glass panel in an adjacent hallway.

The home’s lower floor sits at ground level — “a windowed room with a walkout and a panoramic view,” Ms. Wilson said. Along with a media room, wet bar and gym, this level features a glass-enclosed indoor Jacuzzi tub. Tall glass doors open to expansive green space and vistas of the Rideau.

A few architectural surprises punctuate this part of the home: An octagonal pink granite column appears to support a staircase, and lighting is built into cutouts around the ceiling perimeter. The home’s only wood-burning fireplace is on this level.

Set back from River Road by a long driveway, the home’s landscaped lot includes a gunite swimming pool and two octagonal pool cabanas, one of which has a kitchen.

Manotick, with about 4,500 residents, “offers rural flair with urban amenities,” Ms. Wilson said. “These rural properties are in very high demand, because they offer space and privacy, which is so sought-after right now.”

The village “has the character and feel of a rural community and does in fact serve the surrounding farming community,” said Debra Wright, a broker at Details Realty Inc., in Ottawa. But development is creeping up, including a new 1,400-home subdivision at Manotick’s southern tip, she said. “Ottawa is small, and the fact that you can get downtown in a short time from Manotick makes it attractive.”

After lagging behind red-hot markets in Montreal, Toronto and Vancouver for years, Ottawa, Canada’s fourth largest city, saw home prices balloon in 2020, fueled largely by a surge in demand and “inventory at historic lows,” according to Richard Rutkowski, a broker at Engel & Völkers Ottawa. “Compared to other world capital cities, we were always undervalued. For decades, it was steady growth rather than these big fluctuations.”

After a brief slowdown at the onset of the Covid-19 pandemic, “the market went crazy,” said Ms. Wright of Details Realty Inc., who is also president of the Ottawa Real Estate Board (OREB). “Unit sales were up marginally over 2019, but property values surged.” The average home price in Ottawa jumped 33.7 percent year over year in December of 2020, to 582,267 Canadian dollars ($457,000), according to an OREB report released in January. For condominium units, the average sale price was 361,337 Canadian ($285,000).

The market’s buoyancy has surprised even veteran industry professionals. “I’ve been in business for 41 years, and I’ve never seen a market like this,” said James Wright, a sales representative at The Wright Team at Royal LePage Team Realty in Ottawa. “We’re seeing bidding wars and many offers over asking, which is very unusual for Ottawa. We have clients waiting for properties in certain neighborhoods.”

As for the demand, Ottawa benefits from stability of government employment as Canada’s capital, Mr. Wright said. A booming tech sector, including a new Amazon fulfillment center and local success stories like the e-commerce company Shopify, “also mean companies are hiring and people are coming here to work for them,” he said.

On the luxury end, “$2 million used to be a stretch,” said Ms. Wilson, the listing broker. The number of Ottawa homes sold for over 2 million Canadian ($1.57 million) more than doubled to 48 in 2020 from 20 in 2019, according to the Multiple Listing Service. “And those high-end homes now sell within days or weeks, instead of years,” she said.

She added that heightened activity in rural markets doesn’t mean interest in central Ottawa has waned. “It’s a sophisticated, international city with lower density and fantastic green space,” she said. “There’s not really a bad neighborhood. Ottawa is in a growth stage. In the next three to five years, you’ll be lucky to get in here.”

Who Buys in Ottawa

Along with Ottawans “buying up or buying down,” many of the region’s buyers this year have been transplants from more expensive Canadian cities. “If a couple had planned to buy in Toronto or Montreal, they’re priced out, so they’re now looking in Ottawa, where they can actually enter the market,” said Mr. Rutkowski of Engel & Völkers.

In fact, a Statistics Canada report released Jan. 14 revealed record population losses in both Toronto and Montreal, with “more people moving out to other regions of their province rather than moving in” from July 2019 through July 2020.

Before the pandemic, Chinese and Indian investors had discovered Ottawa as an alternative to Toronto and Vancouver, where foreign buyers face special taxes, Mr. Rutkowski said. Fewer buyers are coming from overseas since lockdown, he said, noting that Americans make up a “negligible” portion of Ottawa’s foreign buyers.

But Ms. Wilson said she served several American buyers last year who were repatriating to Canada. “Many buyers outside Canada are buying properties sight unseen,” she said.

There are no restrictions on foreign buyers in Ontario. Getting a mortgage, however, “won’t be simple,” said Gregory Sanders, a partner at KPMG Canada in Ottawa. “Because of the bank’s due diligence requirements, there are more hurdles for nonresidents.” Many American buyers pay cash, or seek financing from a U.S. institution, he said.

Mortgage limits also vary for nonresidents, with most banks requiring a down payment of at least 50 percent.

Respective provincial laws govern transactions in Canada, according to Michelle LaPierre, founder of LaPierre Law Office in Ottawa. In Ontario, lawyers play an “essential” role, she said: “Lawyers prepare and register mortgage documents on the instruction of the bank and act as the lawyer for both the buyer and the bank.”

Commissions on property sales average 5 to 6 percent in Ontario, Ms. Wilson said, with sellers paying the commission. Annual taxes on this home are about 11,500 Canadian ($9,000), she said.

Buyers in Ontario pay a land transfer tax based on 2.5 percent of the property’s value, Mr. Sanders said. (Ottawa is outside the region affected by Ontario’s 15 percent Non-Resident Speculation Tax on foreign buyers.)