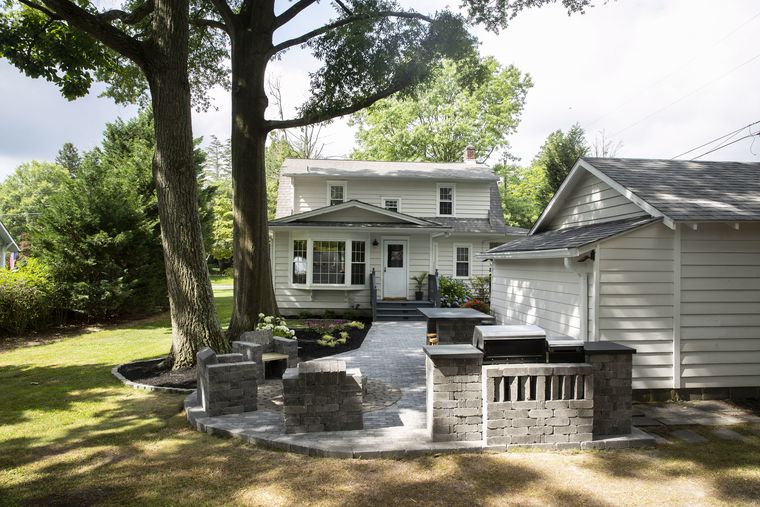 Jeff Lynch stood in the bare backyard of his Dutch Colonial home and watched as the hosts of one of his favorite TV shows transformed it into a place beyond anything he had imagined.

He never misses an episode of Today’s Homeowner with Danny Lipford, the nationally syndicated show that helps people renovate and shares home improvement tips with viewers. Seeing videographers record workers installing a paver patio with a fire pit, chairs, and a grilling station at his own Gloucester County home where dirt, sticks, patches of grass used to be was “surreal,” Lynch said.

Ever since he bought the home in Glassboro almost four years ago, he’s wanted a backyard patio where he could drink his coffee in the mornings and entertain in the evenings. But he figured he should renovate the kitchen and two bathrooms before tackling the yard, which he said he planned to get to “eventually.”

Then he saw on Instagram that Today’s Homeowner, the nation’s second-longest running syndicated home improvement show, was taking submissions for its annual “Backyard Paradise” contest. So he entered. And out of almost 5,000 submissions from across the country, the show picked him.

Building and enhancing outdoor living space became even more popular during the pandemic as homeowners canceled vacations and spent more time at home. They built spaces to enjoy themselves and to add value to their properties when it comes time to sell. The show’s contest offered more than $10,000 worth of materials and labor to the winner. The job was finished in three days.

“It’s something I would never do myself,” said Lynch, 55, who works in pharmaceutical marketing. “I’m not that handy. That’s not in my wheelhouse.”

Lynch has watched other home improvement shows in which teams of people perform elaborate renovations. “You look at it and marvel,” he said, “but it’s like, ‘I’m not gonna be able to do that.’”

Show host Danny Lipford, who is based in Alabama, said he was looking for a backyard project that would complement a modest, well-maintained home. He was drawn to the neatness and character of Lynch’s house.

Lipford hosts Today’s Homeowner with his daughter, Chelsea Lipford Wolf. When she bought her first home, she and her father renovated it for the show, which is now in its 23rd season and reaches more than 2 million viewers weekly. Lynch said their banter is one of his favorite parts of the show.

“People love to see us cutting up and going back and forth on things,” Lipford said.

On his television and radio shows and in appearances on national news shows, Lipford passes on tricks he’s picked up in the more than two decades he’s been in construction and home improvement, especially those that give homeowners “the big bang for a smaller buck,” he said.

“Everything we do is very practical and very real,” Lipford said. “A lot of the things we’re doing aren’t very sexy.” But they help homeowners enjoy their homes.

As the winner of the contest, Lynch was able to dream bigger than he’d planned for his yard. He ditched his small grill for a larger one surrounded by concrete pavers and tabletops. Pavers outline a mulched garden bed with flowers around two mature, existing trees, and more plants frame the repaired and repainted back stairs. Three large chairs made of pavers surround his fire pit near a table, also made of pavers, with a concrete top. Landscape lighting highlights it all.

For homeowners who don’t know where to start with their improvement projects (and haven’t won a contest), Lipford encourages writing down everything that’s bugging them about their property, prioritizing the items on the list, and knocking a few out. He suggests tackling simple projects to build momentum and confidence.

“Just don’t be too ambitious,” he said. “Maybe we do make it look a little easy on TV, but don’t get too carried away.”

He advises homeowners to take on what they can. For example, if they can’t afford to build all the elements they want for their patios, he suggests they complete pieces of their vision as their budgets allow.

Maybe that means just placing a simple table and some chairs in your backyard to start and building from there, said co-host Lipford Wolf, who runs a website with blog posts and how-to videos called “Checking in with Chelsea.”

“You don’t have to have a magazine-worthy space to enjoy it,” she said.

And don’t be afraid to ask for help. For landscaping projects, she recommends that homeowners bring photos of their yards to a local nursery and ask for advice on what would look good and which plants would grow best.

The proliferation of both home improvement television shows and YouTube videos showing home repair tips has made now a great time for homeowners to tackle projects, said Matt Jensen, co-founder of furniture company Semi Exact, which wasn’t involved in the backyard renovation in Glassboro.

Semi Exact, based in Nevada, helps people build their own furniture by guiding them through projects and supplying components to supplement their own repurposed materials. It’s one way homeowners can get around the fact that certain building materials, such as lumber, have become more difficult and expensive to come by during the pandemic.

Concrete has remained consistently available, Jensen said. Customers have been pouring their own concrete tops for pieces such as coffee tables and ping pong tables, pairing them with sturdy metal bases the company ships to them. These pieces can become the central piece to anchor everything else in a yard and can be a source of pride for homeowners, he said.

Thin pavers that homeowners can place on top of worn or cracked patios have been popular for those seeking do-it-yourself projects to improve their yards on a budget, said Patrick Lenow, a spokesperson for the QUIKRETE Companies, the Atlanta-based manufacturer of packaged concrete and cement mixes and products. The contest by Today’s Homeowner was sponsored by the company and its subsidiary Pavestone, which supplied the designs for Lynch’s yard, thousands of pavers, and, to complete the work, seven Pavestone representatives, five of whom were local.

As Lynch watched workers arranging concrete pavers for his patio, he turned to Lipford. “It would have taken me six months to do this,” Lynch said.

The crew got to work on his yard the morning of June 15 and wrapped up on the 17th. The videographers got their final shots the next day.

In the Philadelphia region, Today’s Homeowner airs Sundays at 5 a.m. on WFMZ-TV, and the Glassboro episode is scheduled to air on July 25. The show also is available on On Demand and through streaming devices.