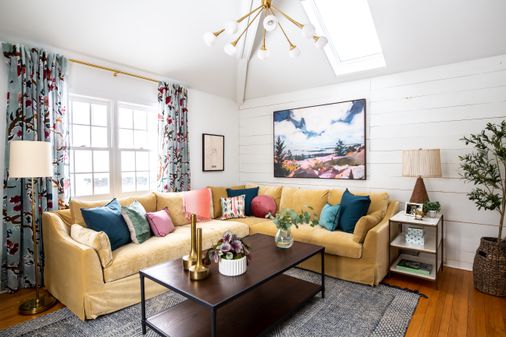 As their kids got older, Jeanne Barber’s clients wanted to turn the playroom into a family-friendly hangout. Although the 1920s Colonial in West Hartford is relatively grand, this room was a later addition and the details were dated. “We painted everything in crisp white, including the wood ceiling beams that we wanted to disappear,” says Barber, principal of Camden Grace. Colorful furnishings pop against the tongue-and-groove planked wall that the homeowners installed themselves. The decor is durable, affordable, functional, and comfortable. “The room needs to span the ages,” Barber says. “They are adding a baby to the mix and grandparents visit often.”

1 Throw pillows in peach, rose, and turquoise play off saturated shades of plum and blue in the artwork. “Choosing different undertones in the same colorway adds dimension,” Barber says. “If elements in a room all match, it can read very flat.”

2 Printed cotton curtains from Anthropologie replaced low-mounted wood blinds. “Hang drapery high to make the room look taller,” Barber advises. “While they should cover the window casing, you don’t want them to block the glass.”

3 A mid-century modern-style chandelier spans the space overhead. “We often find people go too dinky on light fixtures, which can make a room feel cavernous,” the designer says.

4 Barber reconfigured the layout, moving the television to a less prominent wall and hanging a large print by New England artist Jess Franks that her associate, Corey Hunton, found on Minted. “It kicked off the color palette,” Barber says.

5 Barber placed a three-tiered nightstand by Four Hands next to the Ikea sofa. “Side tables can often be too short,” she says. “You want the top to be within two inches of the arm.”

6 The sturdy wood and metal coffee table is great for playing and storing board games and can withstand feet on it. Barber encouraged the owners to retain the existing patterned rug since they have dogs and kids.