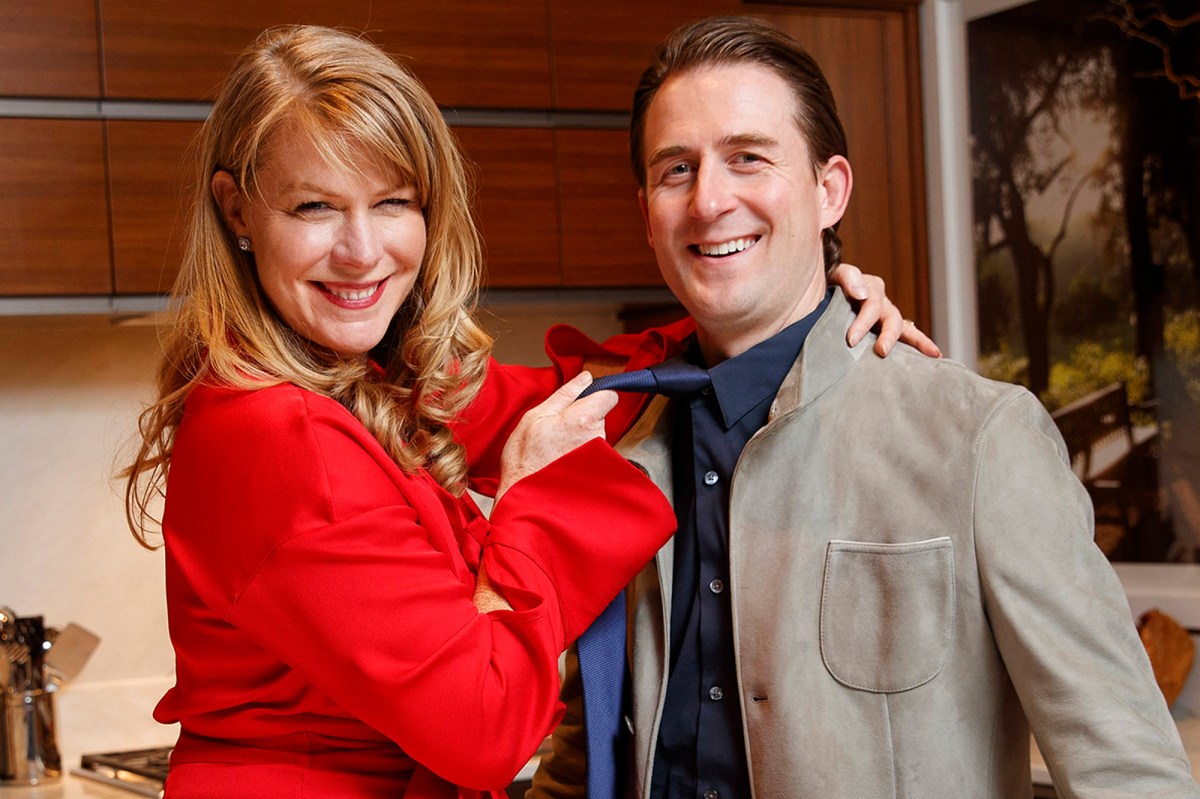 In her new book, “Back on the Market: A Realtor’s Guide to Love and Life” (Forefront Books), Parker, 48, urges lonely hearts to treat their love life like a tony Manhattan property. Her sign-the-contract approach helped end an unhappy seven-year-long marriage and close on her dream partner — Marc Roman, a commercial broker she met at a holiday party though a mutual friend.

“It was lust at first sight and then grew to love,” said Parker, who is now the mother of 6-year-old twins. “I used all my real estate sales tactics to keep him engaged, especially the one about understanding the dance of attraction.”

To others looking to land a Christmas cuddle buddy, Holly offers tricks of the trade.

“A listing needs to look like it’s magazine ready before you show it to prospective buyers,” said Parker – and so do you!

Step No.1: Say goodbye to clutter. Pare down your closets so they’re not overstuffed, hide your kids’ toys and don’t have piles of anything anywhere.

The same goes for your appearance. So get a haircut, buy new clothes and try a new exercise routine.

“If Snow White had halitosis, would she have been awakened by that magic kiss from the prince?” asked Parker. “More likely, he would have been turned off. Help yourself not be a turnoff.”

To close a sale, you have to know a property inside out — its strengths, weaknesses and everything between.

“So many brokers don’t know the basics of what they’re selling like the square footage, the building’s amenities or the competition,” says Parker. “The chances that they’re going to move that unit are low.”

But when you’re searching for a hot new squeeze, the property you need to know is you.

If the thought of a jog in the park sounds like a prison sentence, for example, don’t date a hardcore runner. If you like a work/life balance, don’t go for a workaholic. Also, if you’re serious about settling down, don’t waste time with what Parker calls “the forever renter” — the person who never has serious relationships.

“They’ll date for three weeks and move onto the next person,” she said. “They’ll never want to buy a classic six on the Upper East Side.”

Have a marketing plan

Parker never lists a property without having a marketing plan in place for how she’s going to sell it.

“Marketing is imperative to selling,” she said.

With a fabulous apartment in a C-plus location, for example, she plays up its strengths as much as possible such as the great balcony, ideal entertaining space and large closets. She also targets specific buyers through networking such as tri-state area residents who are looking for a pied-à-terre.

“I call it visioneering,” she said. “You can’t be a pessimistic winner.”

Love seekers should take the same approach: If you’re interested in a country club life, going out in the city weekend after weekend isn’t necessarily going to get you there. Join a country club as a weekend member instead. Or, network in the city by joining groups where you may have the chance to meet someone with like-minded interests such as an arts club or running group.

Most importantly, Parker says that your online profile needs to be killer and include fantastic photos of yourself (selfies need not apply!), along with an appealing description.

“You wouldn’t list an apartment with subpar photos and hope to sell it,” said Parker. “Don’t do the same with yourself.”

Hold out for the right bid

In real estate and in love, eager beavers are a turnoff.

Sellers who accept an interested buyer’s opening bid make other potential buyers worry that they overbid or that something is wrong with the property.  Another sign of desperation is if you’re willing to show your apartment at any day and at any time.

“I can’t tell you how many times I’ve seen buyers renege on an offer because the seller said yes to first bid right away or become wary if they knew they could see the apartment whenever they wanted,” said Parker.  “There needs to be a back and forth.”

Play the same cards with dating. Don’t be instantly available or text and call too many times. And, don’t put yourself entire life story out there at the get go. Creating a mystery and allure ups the ante for attraction.

Ace the board interview

To have any hope of getting the approval of a tough board, there are cardinal rules to follow: Skip the jeans and leg-baring skirts in favor of conservative outfits, and spare members of any colorful stories — keep you answers polite but concise.

With dating, the board is your partner’s friends and family and what they think matters. Win them over by putting the spotlight on them and taking it off you.

“Make them feel important by asking about their interests,” said Parker. “The more attention you give them, the better the bet is that you get their approval stamp.”