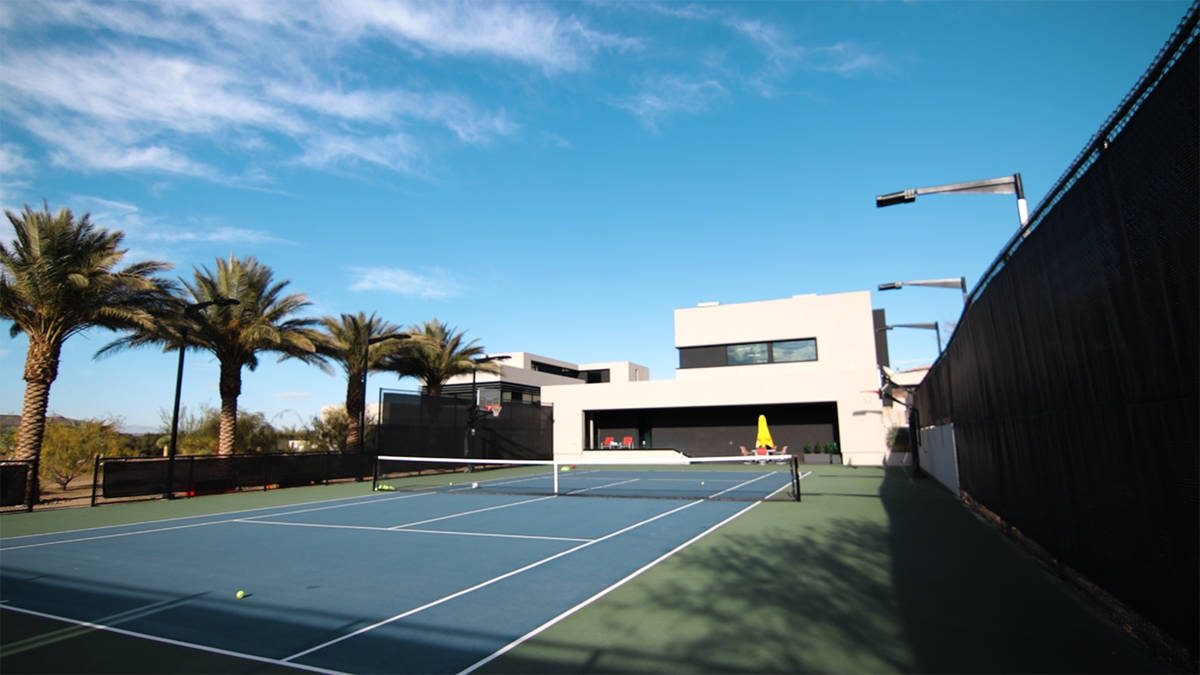 The red-hot luxury real estate market that continues to set monthly records has matched the second-highest sale of the year and recorded the highest sale in Henderson in 13 years, with the buyer being a business owner from Silicon Valley.

This month, a 14,565-square-foot mansion in the Ridges in Summerlin set the record at $14.5 million for the highest-price resale of 2020.

The sale in Henderson, which closed Dec. 4, measures 14,486 square feet with seven bedrooms, 11 bathrooms and two three-car garages. It sits on 2.2 acres and was built by Blue Heron in 2017. Real Estate Millions wrote about the home in 2018, when it was listed for nearly $15 million.

The listing agent was Kamran Zand, real estate broker and owner of Luxury Estates International. Nick Devitte, a broker and owner with Forever Home Realty, was the buyer’s agent. Zand said the sale is the highest in Henderson in 13 years.

The new owner is listed under an LLC with an address in Los Altos, California, in Silicon Valley. Mike and Linda Huhn are the sellers. They bought the lot in 2015 for $2.4 million, according to Clark County records.

The estate has an indoor basketball court with electronic scoreboard and locker room in a separate building that could be converted into a garage holding eight to 10 cars on ground level and up to 20 cars using lifts. Next to the building is an outdoor tennis court and garden.

Besides the main house, there is a guesthouse that has two bedrooms and a living room. It has a rooftop deck with a barbecue area, wet bar and fireplace. The main house has four floors.

The estate has a commercial-style, two-lane bowling alley, movie theater, bar, wine cellar and game room in the basement.

The kitchen, which includes a butler’s kitchen, is on the second floor and features three islands, two ovens, two refrigerators and a grill and pizza oven on an outdoor patio. The second floor is an open area with the living room and dining room and covered patio area with pocket doors that open to the pool.

The third-level master bedroom retreat comes with a separate sitting room, pool table and bar area. It’s referred to as the cube. The room is cantilevered out over a rock face with floor-to-ceiling glass on three sides.

There are outdoor terraces throughout the home, including the master bedroom.

Two junior master suites are part of their own wing with a separate staircase that leads to a bedroom and outdoor deck overlooking the infinity-edge pool, hot tub and a putting green.

The fourth floor has a game room set up with big-screen televisions and refrigerated drawers. There is a bar and pool table in the sports lounge.

“The biggest selling point of the house was the driveway,” Devitte said. “It sits on more than an acre and unlike anything else in Vegas with a statue in the middle that you can change to different colors and different themes for holidays and parties. You can park 70 cars on the driveway alone.”

The home has a modern Blue Heron design that is special because of its stature and views. Every bedroom has a Strip view, he said.

“When you walk in the front door, there’s a glass door and glass wall you can see straight through and the Strip aligns perfectly right there,” Devitte said. “It’s picturesque.”

There were 596 luxury sales for 12 months of 2019, and that total was surpassed at the beginning of November, according to Forrest Barbee, corporate broker with Berkshire Hathaway HomeServices Arizona, California, Nevada Properties. There were 695 sales by Dec. 1, with 98 recorded in November, the most recorded in sales tracked since the Great Recession more than a decade ago. There were 180 pending sales pending on Dec. 1, meaning the luxury market shows no signs of slowing based on the Multiple Listing Service.

Barbee said the post-Great Recession record of 98 luxury market closings in November builds on the 96 in September and 95 in October.

“This is the hottest luxury market we have ever seen in Vegas,” Devitte said. “Houses are selling left and right to cash buyers coming out of L.A., Silicon Valley, New York and Chicago. Everyone is flocking here to escape taxes and get better weather.”

Devitte said California clients cite state lockdowns and expectations of where the state is headed in the future with its political leadership.

“Someone with that kind of money you want your freedom,” Devitte said.

Stephen Siegel, commercial real estate investor and CEO of The Siegel Group, paid $7.3 million for a home in Spanish Hills at 5228 Spanish Heights Drive, according to Clark County records. The sale was No. 5 on the list of sales for the year.

The two-story home closed on Nov. 30. It measures 16,425 square feet with six bedrooms and nine-car garage. It was built in 2012 by Sun West Custom Homes and sits on an acre.

“It’s Mediterranean-style, and those are real Venetian plaster walls inside the house,” said Patty Martinez, sales and marketing director for Sun West. “Some of the beams in the ceiling were repurposed. It was an artfully crafted house with groin vaults in the entryway like you would find in a church. It has a beautiful wine cellar and library above it. It has heated floors throughout on the downstairs.”

Peter Guzman of Wardley Real Estate was the listing agent, and Robert Sibulkin from Luxe Estates and Lifestyles represented the buyer. The seller was listed as an LLC.

“It’s a spectacular home and one of the finest houses that I have seen in Las Vegas,” Guzman said. “From a construction standpoint, the amount of custom woodwork, customer flooring and custom stonework, it’s an incredible home with probably the finest view of the Strip that I have seen. This house has all the bells and whistles.”

In another transaction, entertainment attorney and World Series of poker bracelet winner Carol Fuchs and her husband, Martin Shafer, CEO and chairman of Castle Rock Entertainment, paid $4.875 million for a single-story home in The Ridges, according to Clark County records.

Ivan Sher with The Ivan Sher Group of Berkshire Hathaway HomeServices Nevada Properties was the buyer’s and seller’s agent.