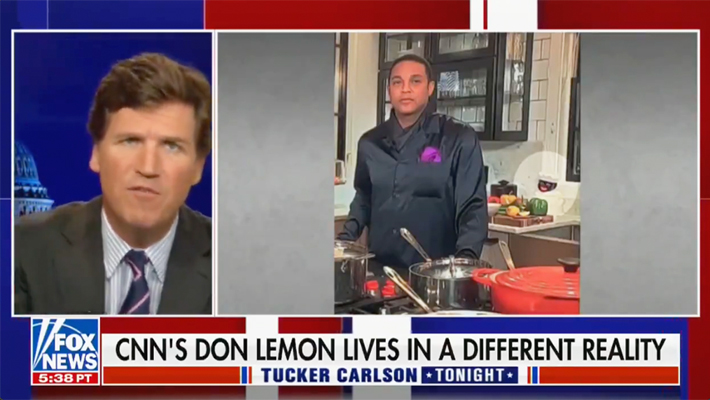 This week, Tucker Carlson decided to deflect (as Tucker is known to do, he’s very good at it) from a damning report about himself and piled onto Don Lemon. Let’s back up a second because there’s a huge mess here that isn’t even close to being mopped up.

The New York Times‘ Ben Smith recently reported that Tucker is secretly “a great source” for unflattering stories about Donald Trump. Instead of Tucker confirming or denying this story (there’s no way he would confirm, and he won’t deny because he loves speculative attention), Tucker decided to completely ignore the story both off-and-on the air. Tucker still won’t answer the still-pressing question of whether he’s been vaccinated, and he even pushed back at Smith with a crack about the writer’s sex life.

And Tucker decided that it was a good time to pick on Don Lemon, given that the CNN host had been profiled by the Washington Post magazine profile to promote his book, This Is the Fire: What I Say to My Friends About Racism. The WaPo mentioned that Lemon lives in Sag Harbor, N.Y., and Tucker used the opportunity to baselessly point out that Lemon lives in a multimillion dollar house in a community that “is just 3% African-American.” Tucker even added, “No, he does not live in Section 8 housing,” and then he argued that Lemon’s living situation is evidence that he “runs away from diversity.”

Lemon responded to these racially charged remarks with disappointment:

“Section 8 housing. Let me simply just say this: If you think that a Black person who doesn’t live in public housing can’t experience or understand racism in this country, well, that just says much more about you and your ignorance on these issues than it does about me.”

Lemon added that he generally prefers not to respond to these sorts of things from the “Fox Propaganda Network,” because he doesn’t like to “punch down.” Presumably, that’s why he didn’t directly respond to Carlson’s wild ranting about a kitchen decoration that he called a “white supremacist QAnon cookie jar” in Don Lemon’s kitchen. Carlson had rambled about “shapeshifters” while adding, “Now, we’re not calling anyone a white supremacist here, but you have to ask yourself… what is this symbol of hate posing as a cookie jar, doing in Don Lemon’s kitchen?”

Apparently, Lemon felt that addressing that particular jab would be a step too far.