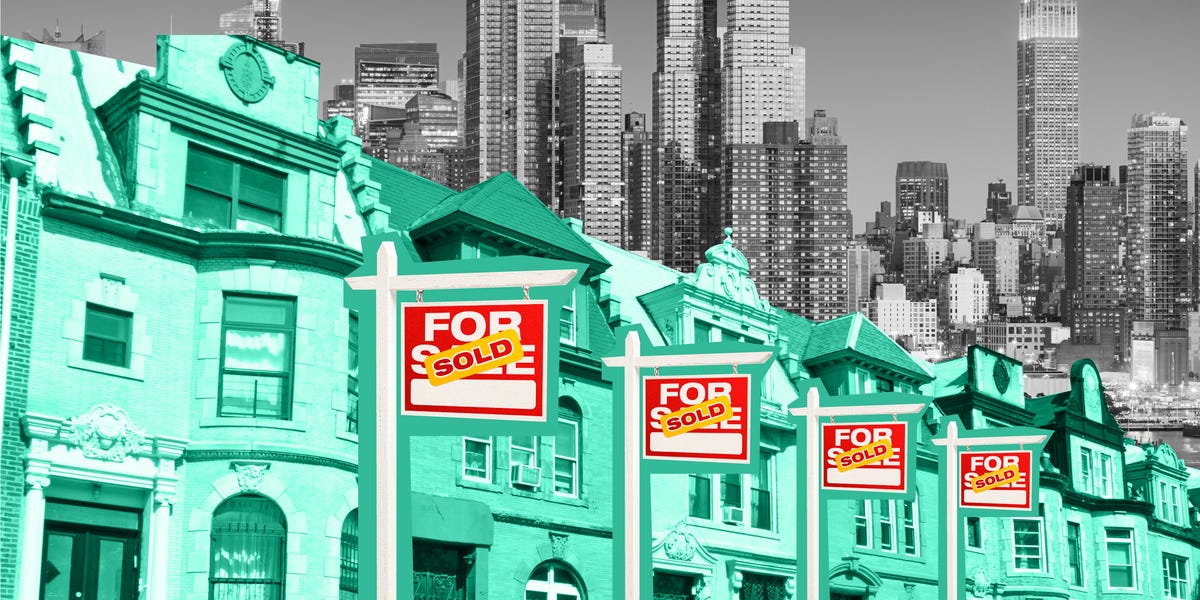 The COVID-19 pandemic upended the New York City real-estate market as thousands of residents fled crowded urban living quarters for more spacious living in the suburbs, vacation-home spots, and even other states.

But despite the upheaval, one borough has stood out as more resilient than the rest: Brooklyn.

So while the road to a full economic recovery is bound to be long — rents are still down from pre-pandemic times, for one, though Brooklyn’s are less depressed than Manhattan’s — Kings County is well on its way to a real-estate comeback from the coronavirus.

Here’s how Brooklyn has managed to rebound faster than its more famous counterpart across the East River.

Even during these tumultuous times, Michelle Young and her family have committed to Brooklyn for the long haul.

The 38-year-old founder of the urban history and culture website Untapped New York had already lived in the Crown Heights neighborhood of Brooklyn for five years. Ready for an upgrade now that she and her husband, Augustin Pasquet, are raising their daughter Charlotte, she bought a townhouse, also in Crown Heights, for about $1.6 million.

They closed on their historic home in January 2020, before the coronavirus pandemic struck New York, and are renovating it. In February, Young and Pasquet put their two-bedroom condo with a terrace up for sale. By mid-March, they had found a buyer. The property officially traded hands in June for about $870,000 — meaning that the buyer went through with the deal despite the pandemic, which is indicative of Brooklyn’s enduring appeal.

One of the borough’s lures, Young said, is that it’s very residential. Even with state and city COVID-19 restrictions in place, it still feels cozy and friendly. But on top of its atmosphere, Brooklyn has a lot of homes with outdoor spaces: terraces, balconies, and backyards.

“That became a real premium during the pandemic,” Young said.

More space for the money

Demand for Brooklyn real estate has risen substantially in recent months as buyers seek outdoor as well as indoor space, according to the Warburg broker Gerard Splendore.

“At present, the market is extremely active,” he said. “Buyers are out in full force to view apartments and houses by appointment, and many are submitting offers on multiple properties simultaneously.”

Buyers’ dollars go further in Brooklyn: In Manhattan, the average price per square foot for a home in a new development is $2,346, according to the Elliman Report. In Brooklyn, that number is $1,013 — which means more square footage for less money.

To be sure, the gentrification of the borough over the past several decades led to increased demand for Brooklyn real estate — and boosted prices there — long before the pandemic.

Some new buyers hail from across the river, while others are upgrading within the borough.

“Many are transplants from Manhattan, where inventory is scarce and prices are higher,” Splendore said, adding that other new homeowners were taking advantage of more affordable prices to nab larger or nicer spreads in desirable Brooklyn neighborhoods.

Many of the areas seeing an uptick in interest now either line the East River or surround Prospect Park, which the architect Frederick Law Olmsted always considered his masterpiece — even over his more famous landscaping project, Central Park.

Brooklyn properties tend to have square feet to spare, from home offices to “Zoom rooms,” said John Walkup, the cofounder of the residential real-estate data-analytics company UrbanDigs. But they still offer relatively easy access to central NYC hubs via public transportation for those who aren’t able to work from home.

“People feel that they’re safer in Brooklyn,” the Compass agent Michael J. Franco told The New York Times in December. “Some of my clients see it as an alternative to moving to the suburbs.”

Townhouse sales are also on the rise, Brownstoner reported, with move-in-ready properties selling in record time and often fielding multiple bids. Townhouses tend to be pricier than co-op or condo apartments, so the increase in sales is evidence of luxury demand.

“The number of signed contracts for all types of properties was up sharply in November compared to the same month last year,” Brownstoner’s Cate Corcoran wrote. “Brooklyn continues to defy conventional wisdom about the residential real estate market during the COVID-19 pandemic.”

Demand, undeterred despite the pandemic

Conventional wisdom, though, may not take into account the outsize demand for Kings County properties.

UrbanDigs quantified the difference in buyer demand in Brooklyn between 2020 and 2021 to show how much it’s spiked.

In January 2020, a data point the company has dubbed the “Brooklyn market pulse” — which is the ratio of pending sales to total supply of homes for sale — was .56, indicating there was slightly more demand than supply. In May, as the stay-at-home orders started to lift and industries were allowed to reopen with restrictions, the market pulse fell to .20. Walkup explained the downward shift: Homes remained on the market, but buyers had largely paused making offers and signing contracts.

Pandemic buyers included the project manager Kerry-Anne Hoffman and the software executive Sung Choi, who purchased a two-bedroom condo in Clinton Hill with a washer and dryer and dishwasher for $1.29 million.

“We love Brooklyn. We know we want to live here for a very long time, so whatever happens, we will ride it out here,” Hoffman, 34, whose dad died of COVID-19, told the New York Post last year. “We’re still living. We have to be safe and do the right thing, but there is homeownership. There is life beyond coronavirus.”

“Brooklyn charged out of the gate after the market reopened, with demand outpacing supply,” Walkup said. “Not only did demand in Brooklyn rebound to pre-pandemic levels, it blew past them.”

Allison Murray ditched Manhattan after nearly a decade renting there to buy an apartment in a new Boerum Hill development.

A 36-year-old who works in finance, Murray wanted a two-bedroom home in a brand-new building. Units that fit the bill were both more affordable and plentiful on the other side of the Brooklyn Bridge. She paid upward of $1.5 million for her new home and moved into her Pacific Street digs in October.

The energy in Brooklyn was what sealed the deal, Murray told Insider.

“I got that neighborhood vibe,” she said when describing her time house hunting in Boerum Hill, a neighborhood where streets are lined with picturesque townhouses and mom-and-pop shops.

To be sure, New York City restaurants have been hit hard by the pandemic, and many iconic institutions have shuttered. But a list of restaurant closures compiled by The Infatuation indicates that trendy Manhattan neighborhoods like the East Village, the Lower East Side, and Greenwich Village have lost more eateries than their Brooklyn counterparts. As a result, street life in what’s called “brownstone Brooklyn” is relatively bustling.

Three months into Murray’s life as a Brooklyn homeowner, she added, the feeling on the streets — and in her heart — hasn’t gone away.

“Brooklyn very much, to me, still feels alive,” she said.

Brooklyn’s bounce back, by the numbers

The metrics coming out of Kings County are consistently more promising than those recorded in Manhattan.

But the borough did traverse a rocky road first. When the real-estate market shut down at the end of the first quarter and into second quarter of 2020, listing activity and sales volume did slow significantly, Splendore said.

“When people talk about the New York City exodus, they’re talking about pockets of Manhattan,” Chris Okada, a commercial broker who bought his first residential property in Brooklyn during the pandemic because it “was the best opportunity,” told ABC News in September. “People are going to look for a better quality of life, so places like Brooklyn are going to do even better.”

Don’t be fooled: NYC property prices are down and listing discounts are ubiquitous. It’s just that Brooklyn seems to be weathering the storm better than the other boroughs. A StreetEasy analysis from November showed just five neighborhoods in New York City where the median home sold above asking price. Four of them — Downtown Brooklyn, Flatbush, Gowanus, and Greenwood Heights — are in Brooklyn. (Rounding out the list is the Queens enclave of South Jamaica.)

Brooklyn homes are getting snatched up faster too, with an average of 80 days on the market to Manhattan’s 122, according to Elliman’s fourth-quarter report.

Another interpretation of these statistics, according to Curbed’s Jeff Andrews, is “that the most expensive homes that are harder to sell are in Manhattan.”

But not even one month into the new year, Brooklyn is setting its own price records. In January, the sale of a Brooklyn Heights townhouse — owned by the Florida Panthers’ billionaire owner Vincent Viola — broke the record for the most expensive home ever sold in the borough. Viola’s 8 Montague St. traded for $25.5 million to a mystery buyer in an off-market deal.

The record the townhouse broke was also set during the pandemic. A $20.3 million penthouse at a new Brooklyn Heights condo building, Quay Tower in Brooklyn Bridge Park, was snapped up in April.

And while that unit — with vistas spanning from the Brooklyn Bridge to lower Manhattan and the Statue of Liberty — went into contract before the pandemic hit, deep-pocked buyers’ commitments to pricey real estate can be taken as signs that they’re committing to living in the borough for the long haul. (Or if the buyers are investors, it’s evidence that they believe that property values in Brooklyn will keep going up despite the public-health and economic crises.)

Brooklyn has lower inventory than Manhattan, the Elliman Report found, with 3,783 empty units available in December to Manhattan’s 13,718 — yet another sign of the hunger for its properties.

Demand is so high and supply is so low that Walkup expects Brooklyn prices to rise throughout 2021, he said.

The streets are paved with pizza

The benefits of Brooklyn life are numerous: The borough has an array of attractions from museums and theaters to bars and restaurants. Even though some of those lures might be temporarily closed or have limited capacity, buyers are banking on the perks when they eventually reopen.

“Brooklyn is a nice place to live and a cool place to work,” Walkup said.

Indeed, despite the pandemic, Young told Insider, Brooklyn neighborhoods have remained lively, especially because year-round outdoor dining and semipermanent street closures have brought residents out of their apartments.

“In fact, it felt more lively because people were working from home,” she said.

It’s a far cry from the reports of eerily empty Manhattan streets early in the pandemic. Even now, once packed business districts like midtown Manhattan and the financial district haven’t yet regained their old city-that-never-sleeps cadence.

As her Brooklyn townhouse undergoes a soup-to-nuts makeover, Young said she appreciated the borough’s friendly, grounded vibes. Most people have primary residences rather than pied-a-terres.

“It’s that feeling of being in a neighborhood and being rooted somewhere,” she said, “when the world is so unpredictable and changing.”

Next post SpaceX, Amazon spat pits world’s richest men against each other over space real estate