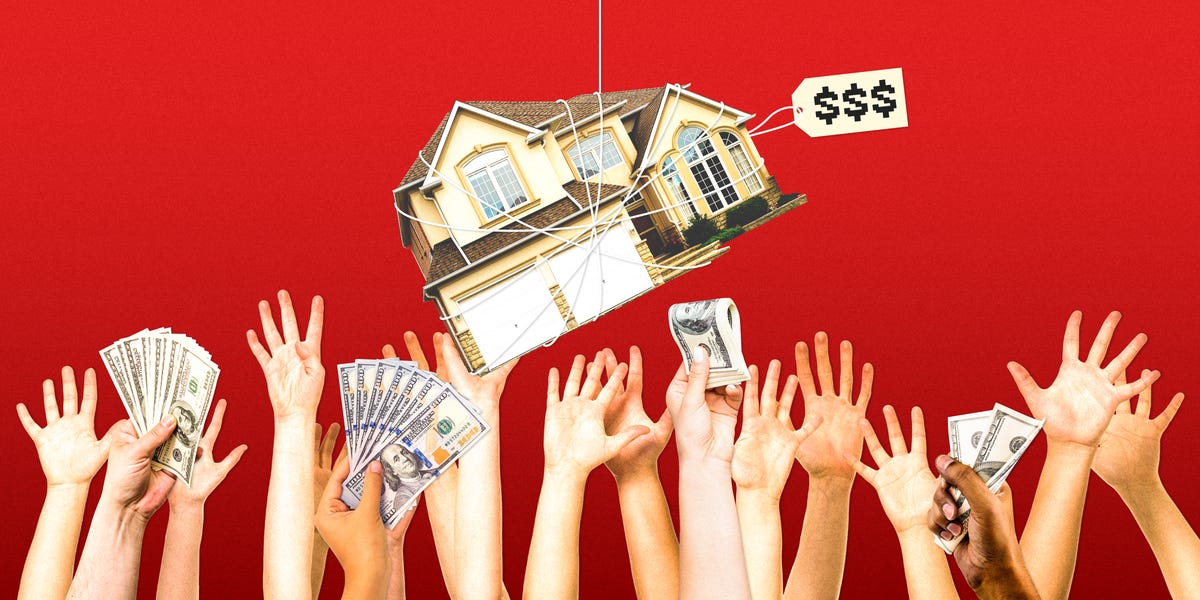 It’s been quite the month for Blackstone.

The private-equity behemoth is part of a consortium of investors that bought Medline for about $34 billion, its share price ticked over $100 for the first time, and it’s doubling down on residential real estate with a $6 billion Home Partners of America buy.

It’s a bet on scorching demand for housing continuing, and also a defensive move as inflation worries start to seep into investors’ minds. The average price of a home topped $350,000 for the first time inn May, according to the National Association of Realtors, logging the largest-ever increase in prices since the NAR began tracking data.

“Whether it’s apartments, storage facilities for warehouse distribution, or single-family homes, private-equity is getting into this as an inflation hedge,” Nicholas Tsafos, a partner with accounting firm EisnerAmper, told Insider.

Home Partners, which owns more than 17,000 homes in the US, rents out these properties, but tenants have an opportunity to someday buy the home.

“Because interest rates are low, and with the potential for a pick-up in inflation, private-equity also feels the need to be long on hard assets,” Tsafos said. “In real estate, you buy it today and then flip it for a higher price.”

Jon Gray, Blackstone’s president and COO, alluded to it during the firm’s earnings call in April when he said multi-family apartments that come with the ability to reset rents were key for Blackstone.

The firm bought many houses at remarkable discounts after the housing market crashed in 2007. It accumulated a number of single-family homes through a former portfolio company Invitation Homes. Blackstone sold its final block of shares in the company in 2019.

The private-equity shop also favors logistics spaces, such as warehousing, life sciences offices, and media and studio businesses with offices, according to a June 22 research note from UBS.

In October, Blackstone made a handsome investment when it sold life sciences real-estate company BioMed Realty for $14.6 billion, after acquiring it for about $8 billion in January 2016.

And it’s not just Blackstone. Fellow private-equity investor KKR is investing in My Community Homes, a platform that buys and manages single-family rental properties, according to Bloomberg.

KKR will invest in My Community Homes through its real-estate and private-credit vehicles.

A spokesperson for KKR was not immediately available to comment.

The Carlyle Group said in May that it provided up to $300 million to Four Springs Capital Trust, a private

Four Springs will use the money to build its portfolio, which encompasses 122 properties across 29 states, Carlyle said in a press release.

The move on real estate comes while private investment firms sit on more than $1 trillion in cash. Borrowing costs, too, remain subdued as the Fed keeps interest rates at all-time lows.

Given the sheer amount of dry powder available, coupled with accommodative credit markets, private-equity is keen to conduct a surfeit of acquisitions, and isn’t shy about injecting large sums of equity into prospective investments.

Medline, for example, is expected to raise roughly $17 billion from the debt markets, while the private investors are providing a similar amount in equity.

“Big leveraged buyouts are back in vogue,” said Christopher Zook, chairman and CIO of alternative investment manager CAZ Investments. “Whether it’s KKR or Blackstone, they have large capital to put to work. So they’ve got to do a ton of deals.”

Masters of Food and Cooking