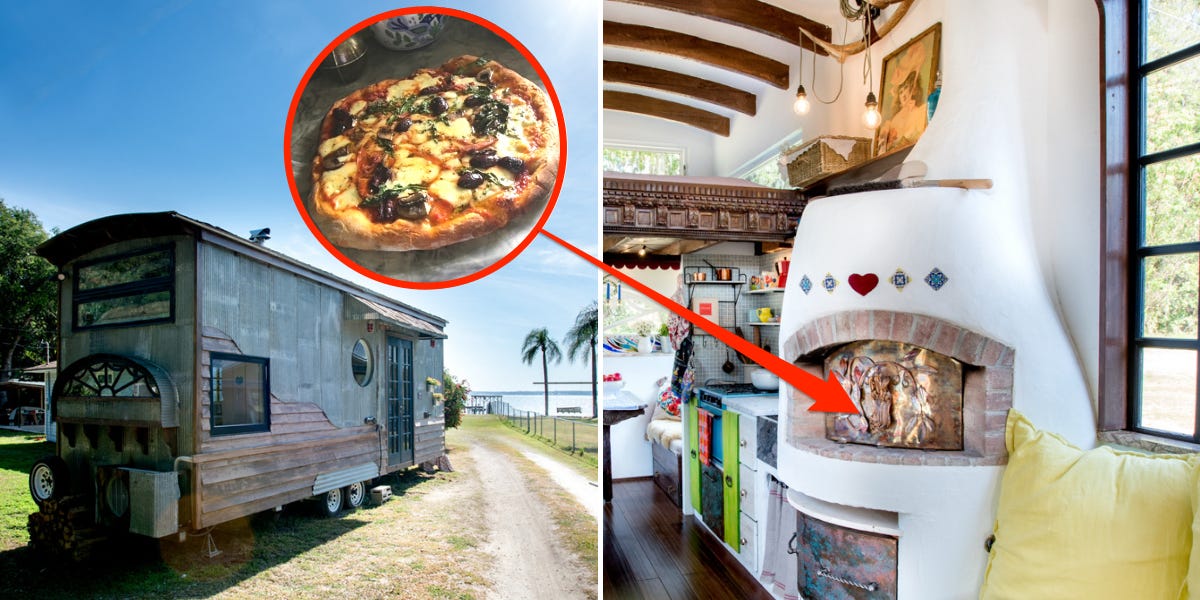 With just over 300 square feet of living space, Rebekah and Robert Sofia had to prioritize what they wanted and needed in their tiny home.

For the couple, that list of essentials included a pizza oven.

In 2015, Rebekah, 56, and Robert, 60, started designing and building their dream tiny home in Summerfield, Florida.

By 2017, the home was complete, and since then, the couple has enjoyed cheesy, bubbly pizza from an oven they built by hand.

In 2015, Rebekah and Robert decided they wanted to simplify their life and move into a tiny home.

Rebekah said the entire home cost $15,000 in materials, and the couple spent 20 months building the house on weekends and evenings. They used reclaimed materials, and besides the insulation, they built every part of the home themselves.

Rebekah, a designer, said the interior was influenced by different European architectural styles and designs.

When Rebekah was laying out the design of her future home, she recognized things she wanted and needed.

The list included a deep sink, a full-sized refrigerator, and a gas stove. Also on the list was some sort of fireplace.

Back in their old homes in Tennessee, the couple had always loved having a fireplace in their kitchen.

“I just love fire for one thing,” Rebekah said. “I love the smell of it. I love the coziness of it. I think it’s very warming and welcoming.”

They brainstormed ideas for a fireplace and landed on a wood-burning pizza oven. The oven would have a dual purpose: Cooking pizzas and burning wood just like a traditional fireplace.

Once they decided on the pizza oven, Rebekah said the kitchen and much of the home’s design revolved around the oven.

While it takes up some space, Rebekah said it’s worth it.

“The spot that it takes up would either been extra couch space or maybe extra storage room,” she said. “To me, it was a worthy tradeoff.”

Rebekah estimates the pizza oven cost about $1,500 in materials. She and Robert built the oven in about two weeks.

Fortunately, both couples had prior experience in design and building.

They had built the two fireplaces in their former homes, and Robert had worked as a mason doing stonework and brickwork.

Together, the couple used fire brick, plaster, and fire-resistant mortar to build the oven. Ceramic wool was wrapped around the entire oven to keep it insulated and fire-proof.

The door to the oven was also handmade by Rebekah. It features rosemary stems from her rosemary bush at her old home.

Rebekah said that even when the oven reaches 700 degrees, the outside is cool to the touch.

The first pizza in their tiny house was memorable

After finishing the oven, the couple enjoyed their first pizza in their unfinished home.

The house wasn’t complete yet, but Rebekah and Robert couldn’t wait to test it out.

They unfolded lawn chairs and sat in their partially-done living room to enjoy their first pizza.

Rebekah said there was a learning curve to making pizzas. She recalled dropping the first one, and it took some time to learn how to use a pizza peel.

Nearly three years later, the couple has mastered the process.

Rebekah said they make pizzas at least once a month during the cooler months in Florida, and it also functions as a fireplace.

Rebekah said her favorite pizza is a simple one with garlic, four-cheese blend, fresh basil, and Kalamata olives.

“I definitely feel like it was worth it,” Rebekah said. “I love my home. I put my heart and soul into this home.”