Interior designer and ELLE DECOR contributing editor David Netto sat down with his friend Deborah Berke, the dean of the Yale School of Architecture and an ELLE DECOR A-List Titan, to discuss his latest project—the renovation of a contemporary house in Paradise Valley, Arizona. The home is a case study in breaking the rules of design and the fun in flouting “good taste.”

Deborah Berke: We share a love of houses that are really rooted in their environment. For this project in Arizona’s Paradise Valley, I’m wondering how you specifically worked with the local landscape.

David Netto: The house has many gifts, but the best is its vista of Camelback Mountain. It’s one of the most desirable sites in Paradise Valley, which is sort of the Bel-Air of Arizona—and that’s because of the view. But that isn’t visible from the “inland” side, where you arrive at the front door. It’s like a surprise desert narrative.

The primary sitting room has a vintage J.A. Muntendam desk from Orange and a Harry Bertoia for Knoll chair from Hive Modern. The vintage armchairs are by Børge Mogensen, the carpet is by Stark, and the curtains are of a Lee Jofa fabric.

DB: There are also more intimate views. It almost feels like you could reach through any window of this house and prick your hand on a cactus.

DN: There is a sequence of little walled gardens around the house—intimate, just as you say. I wanted to capture those moments where you have outdoor spaces with lush vegetation—in contrast to the “big” outdoors, which is just rocks. You feel that the natural world has been pulled inside the house, whether by trick of palette or materials. It’s an old Neutra trick: the illusion that modernism can make real the fantasy of living outdoors.

In the primary bedroom, the CB2 sofa is in a Rogers & Goffigon velvet, the Charlotte Perriand cocktail table is from Cassina, and the rug is by Serena & Lily. The desk is custom, and the chair is from Harbinger.

DB: When it came to what you put inside, you clearly were working with what you saw outside.

DN: In one of the guest rooms, Lily Dierkes, the designer who assisted me on this project, chose a green bed from Industry West. It does have to do with that cactus that is framed in the window. You want to make connections to context and views, and you can do that very deftly with color. Most of the rugs also relate to the palette of the landscape, which further helps to blur the distinction between outdoors and in.

The kitchen’s sink and fittings are by Miele, the range and hood are by Wolf, and the chair is by Frank Gehry for Vitra; the upper cabinets are in Rosemary Green and the lower cabinets are in Thundercloud Gray, both by Benjamin Moore.

DB: The furniture throughout this house is quite eclectic. It’s not today’s sort of rote midcentury modern.

DN: I don’t flout rules just to be insolent, though that approach has its place. I do it because I want to add to the story of a house. Everybody knows what orthodox modernism is supposed to look like—Eames, Mies, Saarinen, and the usual gang. All masters, but all very familiar within architecture like this.

“There was much more courageous decoration in the 1970s”

I grew up looking at Architectural Digest in the 1970s, when people weren’t intimidated to put antiques in modern environments. Michael Taylor was the master of this kind of beauty by contrast (we have two of his chairs in the living room). There was much more courageous decoration in the 1970s, and decorators better educated about design history and so better equipped to take chances. I wanted to put some of that legacy into this house. There is a pair of 17th-century Dutch ebony mirrors in the powder room, for instance, with white Formica and cork walls.

The breakfast nook’s table is from Rove Concepts, the chairs are by Harry Bertoia for Knoll, the chandelier is by Ilmari Tapiovaara for Santa & Cole, and the artwork is by Indigenous artist Fritz Scholder.

DB: Any other favorite pieces?

DN: Well, to honor the glorious ghosts of the desert, we bought a marvelous Frank Lloyd Wright–style desk. I was thrilled when we found that desk at Orange in Los Angeles.

Pierre Koenig’s iconic Case Study House No. 21 inspired Netto to paint the home’s steel overhead beams black, like these in the primary bedroom. The pine bed is custom, the chair is by Frank Gehry, and the tapestry is by Conrad Marca-Relli.

DB: There’s a fearlessness but also a casualness to the house. I too work with a lot of art collectors, and I’d love to hear you talk about the art in the house. I like how unpretentious it is, but it’s still really powerful.

DN: I wanted tapestries to be the signature art form here, because they’re fuzzy and warm, kind of between art and a blanket. The Burton Kopelow tapestry, inspired by the art of Jules Olitski, was the first thing we bought for the house. But my favorite tapestry is the giant Brutalist one in the primary bedroom. The scale of it is just enormous—very, very heavy and thick, like a wall. It’s as if the headboard has become a whole wall of the room.

A view into the kitchen.

DB: One final, funny question: Vertical blinds? I mean, you’ve got to tell me.

DN: Vertical blinds were invented for this house, Deborah. And I know why you’re laughing—nothing is more out of fashion. But nothing is more irresistible to me than coming to the rescue of an underdog. I love it when everybody thinks something is really over, and then you can bring it back. Anything can come back if you know what you’re doing. Remember, nobody was deader than Gucci. Look at Halston’s office in the [Netflix] show. I think in some way those blinds are a rescue message that spells out the words of the great Albert Hadley, who would have loved this house: “Give ’em what they never knew they wanted.”

This story originally appeared in the October 2021 issue of ELLE DECOR. SUBSCRIBE 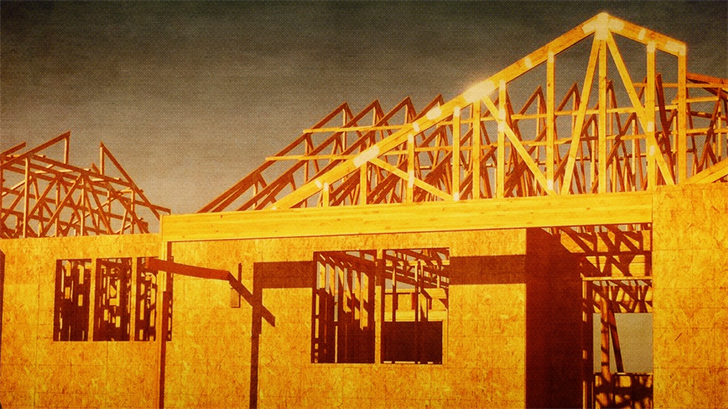